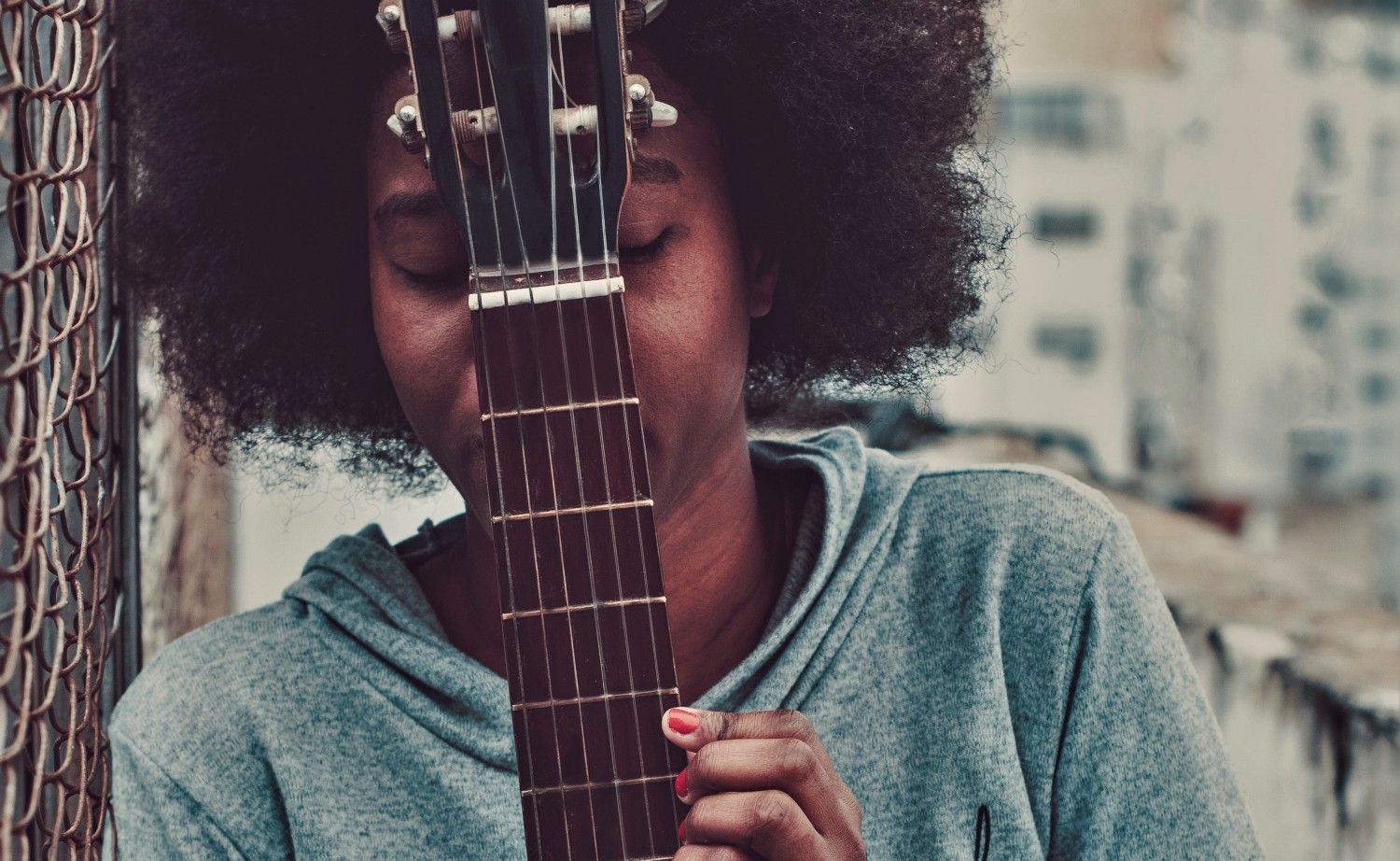 by Sarah Valentine
Higher ed, race, and culture. PhD. Proud Black/Mixed Woman. Author of When I Was White. Making the world a more interesting place.

I sat down to speak with therapist and long-time musician Bill Harrison about the challenges his clients face during this time of police brutality, protests, and reckoning with America’s long history of racism. Bill joined me over Zoom from his home in Chicago, IL.

Sarah Valentine: What motivated you to become a therapist for artists and writers?

Bill Harrison: Having lived and worked among musicians, actors, dancers, and writers for the last few decades — I played upright bass for over forty years — these are the people I know best. I have direct experience of both the benefits and the pitfalls of a life in the arts.

In graduate school, I realized that artists as a population are underserved by our healthcare system — marginalized by below-average incomes and inadequate or nonexistent health insurance.

When I combined those bits of knowledge with my training as a mental health counsellor, focusing my attention on helping artists seemed like the most natural fit. There’s a bonus for me: I get to hang out with interesting, creative people.

SV: What special psychological and emotional challenges do artists and writers face?

BH: Creatives face many of the same issues as “civilians” but suffer from somewhat higher rates of depression, anxiety, and substance abuse. The inherent conflict between art and commerce often incites a cluster of issues unique to people who choose to combine their creativity with the necessity of making a living: Artists tend to gauge their self-worth on their degree of success, whatever that means to each individual.

However, since talent and hard work are no guarantee of recognition, “success” heavily depends on many factors outside of each person’s control. Some of these include geographic location, race, gender, body type, and educational opportunity. There is also no predicting the whims and biases of casting directors, audition committees, literary editors, and other guardians of the gates. This blend of dependence and uncertainty is a likely recipe for psychological and emotional challenges.

SV: Did you experience any of the same issues as your clients during your 40-year career as a musician?

BH: Yes, of course. The historical context was different — I persevered, for example, in the aftermath of both 9/11 and the economic bust of ‘07-’08 — but the anxiety I had to find ways to manage is the same anxiety my clients are confronting in the present. We’re all dented cans. My ability to identify with the lived experience of the people I work with makes it possible for me to be empathic.

SV: Have you found that artists and writers of color face unique challenges today?

BH: Without a doubt. The racism baked into every aspect of American life doesn’t spare people of color working in the arts. It may, in fact, be more pronounced, due to our culture’s conflation of art and entertainment.

When art becomes business, the people holding the reins of power always have their eyes on the bottom line, which has been shown to breed rampant prejudice. The lack of racial/ethnic diversity at film and TV studios, in writers’ rooms, and directors’ chairs is clear evidence of bias in one corner of the American arts industries.

Here’s a quick example of long-standing racism in the business I know best — music: The Chicago Federation of Musicians bears the designation Local 10–208. Although members are either ignorant of (or would prefer to forget this fact), the hyphenation is the result of historic racial segregation.

When the precursor of the musicians’ union (Local 10) was formed in 1901, it barred African American musicians from membership. Black musicians responded by organizing their own union, Local 208. The two groups did not merge until 1966. Half a century later, Chicago’s musical community remains stubbornly separate and unequal. One glance at the racial makeup of the city’s highest paying work environments will tell you all you need to know about the lack of diversity in the local music biz.

A more current example: In late May of this year, playwrights of color at Chicago’s Victory Gardens Theater resigned en masse after being denied a seat at the table when the theater’s board chose a new executive artistic director. A nearly identical conflict erupted in 2011 when the board preemptively chose the artistic director who is leaving now. Lessons still not learned, apparently.

SV: After the tragic murders of George Floyd and Breonna Taylor and the wave of protests that have followed, have you found that your clients’ needs have changed?

BH: Mr Floyd’s and Ms Taylor’s murders and the subsequent protests here in Chicago have amplified the already heated-up level of anxiety among all my clients, artists included. This is not an original thought, but it’s clear to me that the current worldwide responses against police brutality and in support of Black Lives Matter are partially the result of the pandemic.

Months of the disproportionate impact of the COVID–19 virus on communities of color has exposed, in an impossible–to–ignore way, the glaring inequities in access to affordable healthcare (among myriad other systems).

Many of my clients, already on tenterhooks, have been experiencing increased fear and worry. Our conversations have evolved to reflect this spike.

SV: During this time, have you struggled emotionally or psychologically in your role as a therapist?

BH: This period has been the most trying of my current professional life so far, and one of the most difficult of my life altogether. Owing to my age and a cocktail of pre-existing conditions, I’m at high risk for the virus, so I’ve had to be extra careful with sheltering in place and staying safe if I do venture out into the world. I obviously cannot see my clients in person. And working via Zoom is, in my estimation, 25% more energy-consuming and 10–20% less effective than face-to-face sessions. These externalities have taken an emotional toll on me.

In addition, this has been a time of increased self-reflection for me as a White person living in a racist culture. I’ve been aware of the acutely dysfunctional nature of our socio-political structure that strongly favors anyone wearing White skin for a long time. But I’ve had to keep reminding myself, over and over, that I’m not as “woke” as I’d like to think.

Working with African American, Latinx, and Asian American clients has pushed me to continue scrutinizing my racial blind spots and to try, as they say, to do better. It’s not easy to stare at the racist in the mirror, especially in the context of these troubling times.

My wife, who is also a therapist, and I are privileged to have been able to continue working throughout the months of the pandemic. We are fortunate to have a comfortable place to live, food on the table, and ample resources. Emotionally, however, it’s been a tough few months.

SV: Do you believe writers and artists can have an impact on social justice?

BH: It’s been demonstrated time and again that artists in all genres have made significant contributions to the advancement of social justice. Spike Lee comes to mind immediately, as do James Baldwin, Nina Simone, and Charles Mingus. Playwrights August Wilson, Ntozake Shange, and, more recently, Antoinette Nwandu have shocked and awed American audiences with their no-holds-barred portrayals of African American life.

Contemporary writers like Roxane Gay, Zadie Smith, Ta-Nehisi Coates, Kiese Laymon, Alexander Chee, Lindy West, Carmen Maria Machado, Rebecca Solnit and so many others have published work that moves the needle on discourses around race, misogyny, LGBTQ and other issues. Contemporary music is rife with artists who plumb similar depths; no name-dropping is required here.

So, yes. Artists are critical to advancing social justice and deserve our support.

Bill Harrison MA, LCPC is a psychotherapist practicing in Oak Park, IL. Find him at https://billharrisontherapy.com/