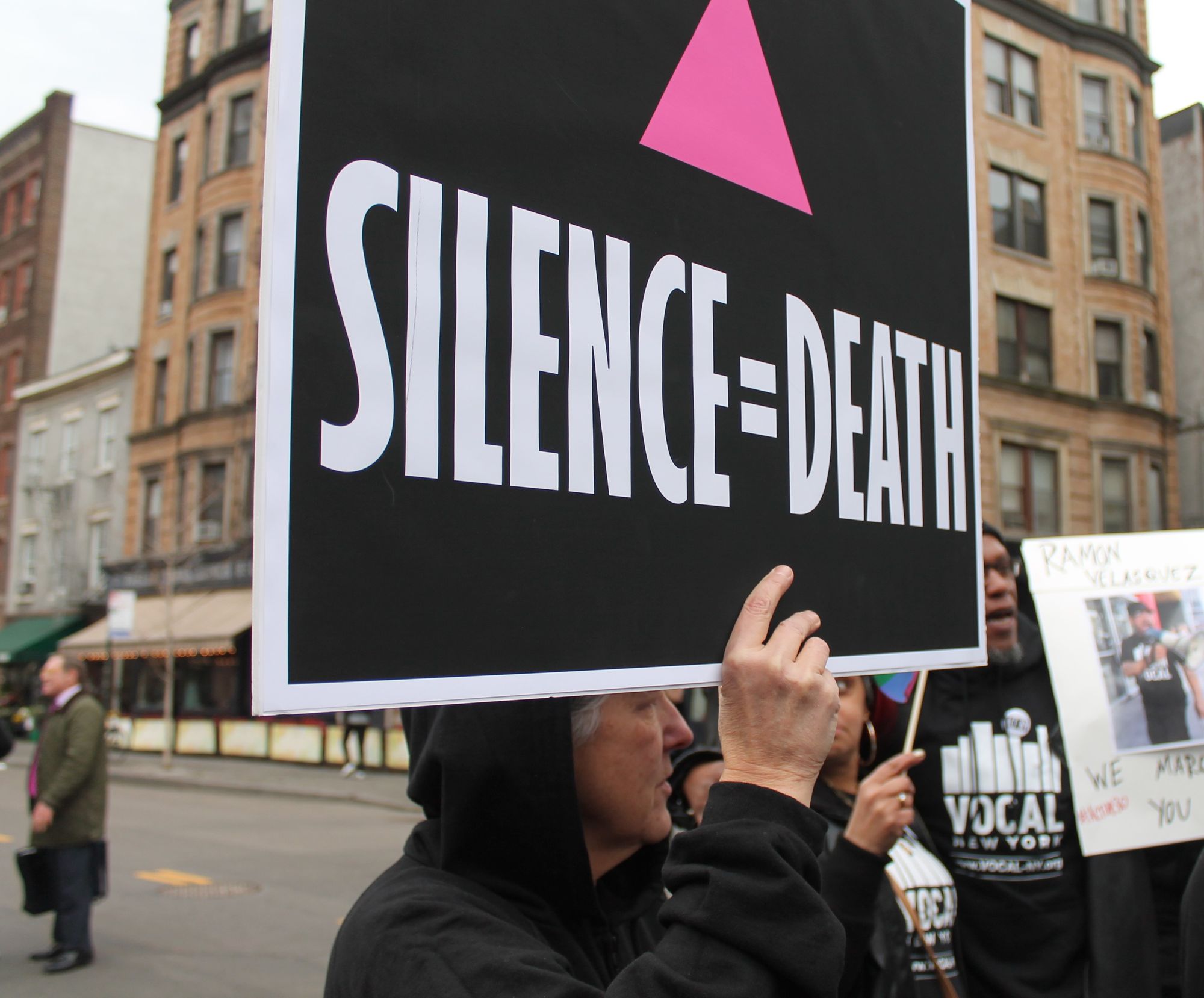 It’s incredibly depressing to admit that during the near two decades in which I have been in education, not once have I been taught about the AIDS pandemic. And that's also despite studying history at two, supposedly very liberal, universities that pride themselves on having diverse curriculums.

It was not until I watched POSE, a TV series about New York City’s LGBTQ+ community in the late 1980s, that I was informed on this seminal period.

Those who were HIV positive or died of AIDS during this time were treated as if they were sub-human. Homophobia intensified greatly, as many described the virus as the ‘gay plague'. What is even more disturbing is this sort of misinformation still circulates today.

It was during a module on the history of protest movements that I decided to conduct my own research into the ACT UP movement: The AIDS Coalition to Unleash Power.

I just watched the episode of POSE where the main characters had participated in a ‘die in’ with ACT UP New York - a form of protest where the participants simulate being dead to highlight all of those who had passed away as a result of the virus, who had been ignored by the public and government.

Founded in New York in 1987, ACT UP went on to open 148 chapters worldwide. I went into my research with the expectation that at least some historians had acknowledged the UK chapters, with the movement being so large, ACT UP was active in London, Manchester, Sheffield, Norwich, Leeds, Leicester, Edinburgh, and Brighton. Despite this, I struggled to find any coverage.

Lord Fowler, who was the Health Secretary during the height of the AIDS crisis, recently admitted that Thatcher decided against promoting harm reduction education to prevent the virus from spreading because she considered the threat of HIV/AIDS to be an effective deterrent for gay sex. It seems as if the Tories have always had a knack for neglecting the population during a pandemic which results in a greatly increased death toll.

Once again history sets an example of what to expect today: pandemics often result in a surge of abuse towards a particular community, that has been wrongfully blamed for causing the spread of a virus. In the current instance, there has been a global rise in hate crimes towards Asian populations as a convenient scapegoat.

As governments across the world failed to even acknowledge the existence of AIDS and HIV, people affected by the virus took it upon themselves to fight for accessible medication and an end to the stigmatisation that surrounds those who are HIV positive– and they are to this day, with many chapters still active including ACT UP London. Founded in 1989, the chapter became the first European sector of the movement.

“It was about direct action, about going onto the streets and shouting very loudly and chaining yourself to whatever you could chain yourself to, kicking and screaming and everything to try and get people to take notice of AIDS”. - John Campbell, a prominent member of the London branch of the movement.

This is echoed by Will Nutland, another member of the group, who explained;

“We never spent any time doing any medium to long-term thinking…everyone was just young and angry, and many thought that they would soon be dead”.

As members of their communities were being diagnosed with HIV and dying of AIDS at such a rapid rate, the movement had no time to waste.

Demonstrations had to break the mould when it came to methods of protest, and so they adopted shock tactics in their activism, promoted with eye-catching symbolism.

British groups followed their international counterparts in adopting the pink triangle (which symbolised both oppression and survival), featuring it in almost all of their campaign material.

The same poignant slogans were also used, such as “SILENCE = DEATH” and “TURN ANGER, FEAR AND GRIEF INTO ACTION”. Passive membership was not an option within this movement.

As was mentioned earlier, misinformation was, and still is rife surrounding HIV and AIDS. Many held the belief that the virus could be spread through saliva or close contact. When the Princess of Wales had close contact someone with the virus, it was monumental in tackling the stigma that surrounded it.

Another falsehood that was widely believed was that heterosexual people were not at risk of getting HIV. When The Telegraph reported this as fact, ACT UP members held a ‘die in’ at the newspaper’s headquarters in 1989. Not only did columnist Geoffrey Wheatcroft deny that straight people could get HIV, but he also argued that the link between homosexuality and AIDS was as “clear as that between smoking and lung cancer”, and that those who had the virus should not be allowed to receive treatment from the NHS.

The stigmatisation of those with HIV and AIDS was both enabled and encouraged not only by media outlets but entire corporations. ACT UP UK called for the boycotting of TEXACO, as the company requested all potential employees to be tested for the virus, which unless people are having sex and needle sharing in the bathrooms, wouldn’t be able to be transmitted in a workplace.

UK chapters advertised the company’s helpline in their newsletters, asking members to protest by calling and complaining about the procedure.

UK Chapters, alongside their international counterparts, also campaigned for those imprisoned to have access to information on how the virus could be spread. There were multiple incidents of UK groups visiting prisons, catapulting condoms wrapped in information leaflets over their walls, which warned of how HIV could be transmitted by needle sharing.

HISTORY WILL RECALL
THATCHER DID NOTHING AT ALL!

As politicians continued to ignore the pandemic, ACT UP took to forms of protest that exposed what was going on, forcing them to acknowledge it.

MPs were confronted in ‘zaps’: a demonstration designed to embarrass a public figure by presenting facts about their cause in a crowded place.

Health minister Virginia Bottomley was confronted in this manner; after finishing a speech exaggerating her part in the action to find treatment for those HIV+, ACT UP London leapt to their feet and unfurled a banner in front of the Minister’s podium that read “Hypocrisy = Death”.

Thatcher, of course, was zapped multiple times. One episode took place when she was attending an opening of a new hanging at the Tate Gallery. Six ACT UP members, disguised as art students, pretended to conduct a live class on the grounds of the Tate as security guards hovered.

When she left the gallery, demonstrators leapt through the security cordon around the PM and produced placards that they had hidden inside portfolio folders.

WE DIE. THEY DO NOTHING!

Symbolism was the method used not only in ACT UP’s campaign material but in public demonstrations, stimulating people to stop and try to comprehend how urgently their cause needed to be addressed.

For example, ACT UP Manchester covered Piccadilly Gardens with wooden crosses: one for every 50 lives lost to AIDS in the UK.

In London, the most common destination for chapters from across the nation to unite and protest, crosses were painted on Parliament Green to mark the death of the Health Education’s “Safer Sex” campaign.

Wreaths and coffins were also used in protests, which were personally delivered to members of organisations that had outwardly discriminated against people who were HIV positive.

HOW MANY MORE HAVE TO DIE BEFORE YOU JOIN THE FIGHT?

Unfortunately, the public reaction to ACT UP highlights how homophobic and backwards the UK was in the late 1980s and 1990s.

In my research, I used newspapers from the time to give me insight into the public response to ACT UP. I still remember the first document that I looked at, which was an interview with Jimmy Sommerville, who said that he was more afraid of press coverage of him getting ill than AIDS itself - it demonstrated the sad fact that our press has always lacked a moral compass.

I found it very difficult to find ACT UP referenced at all in any mainstream media outlets, but those that did it was often in a dismissive manner.

The Daily Mail, keeping up with its reputation, used the situation to attack left-wing ideology.

The only article that I could find in the paper’s archive based on the movement didn’t even address ACT UP by its name - rather just referred to them as "the politically correct’".

Isn’t it disturbing to see how right-wing newspapers recycle these narratives? As many historians have highlighted, 'woke culture' or 'political correctness' is perceived to be an ‘issue’ unique to today. But Right-wing tabloids have always called us that, to encourage the fear-mongering narrative that we are ‘going too far'.

George Gale (who from what I’ve read seemed to be the Piers Morgan of this period; the self-proclaimed “voice of common sense”), criticised a newspaper which said that people could die nobly from AIDS:

“It is a backhanded insult to the many more who die equally from diseases that aren’t caused by their own inactions and indulgences”.

Protestors were met with extreme hostility - yet still risked themselves to spread the message of their cause. One group of demonstrators had a bucket of ‘unidentified liquid’ tipped on them by a group of builders, who had also put up a sign saying: “BURN AIDS CARRIERS”.

LGBT+ history is still not featured on the national curriculum, and is still a niche in what could be referred to as ‘mainstream history’: the main historical topics presented in best-selling books, or popular TV shows and films.

People need to be more informed about the history of the AIDS crisis, about how people were treated and on real information instead of misinformation about the virus itself.

As for the ACT UP movement, I could only find academia on the US branches of the movement. However, I recently discovered that academic George Severs is writing his PhD thesis on the movement. I’m hoping that this will stimulate interest and coverage of this history.

As stated, the lesson still hasn’t been learned of how pandemics can lead to a surge in hate crimes and scapegoating - and there is still not enough acknowledgement or prevention for this, as demonstrated by the rise in racism towards Asian populations as a result of COVID.

ACT UP London is still active today, as they continue to fight for medical research and accessibility, and against the stigma that surrounds being HIV +.

Youth Stop AIDS, which I am a member of the Sheffield branch, is a national movement that I would strongly recommend supporting or participating in they are currently focused on trying to stop UK government cuts to the global fund to end AIDS.

I met with my local MP after emailing him about this issue, and he pledged to try to fight against these cuts in parliament. If you are looking to get involved, YSA offer templates for emails and provide training for how to conduct a meeting with your local MP, offering you all of the relevant statistics and information.

Over 100,000 people are HIV positive in the UK today, although there is medication available now that suppresses the virus so that it cannot be passed on.

However, ACT UP’s message is still as relevant today as it was back in the 1980’s- as was made clear with the rapper DaBaby’s recent comments about the virus, exemplifying that there is still a great deal of ignorance surrounding HIV/AIDS left to combat.