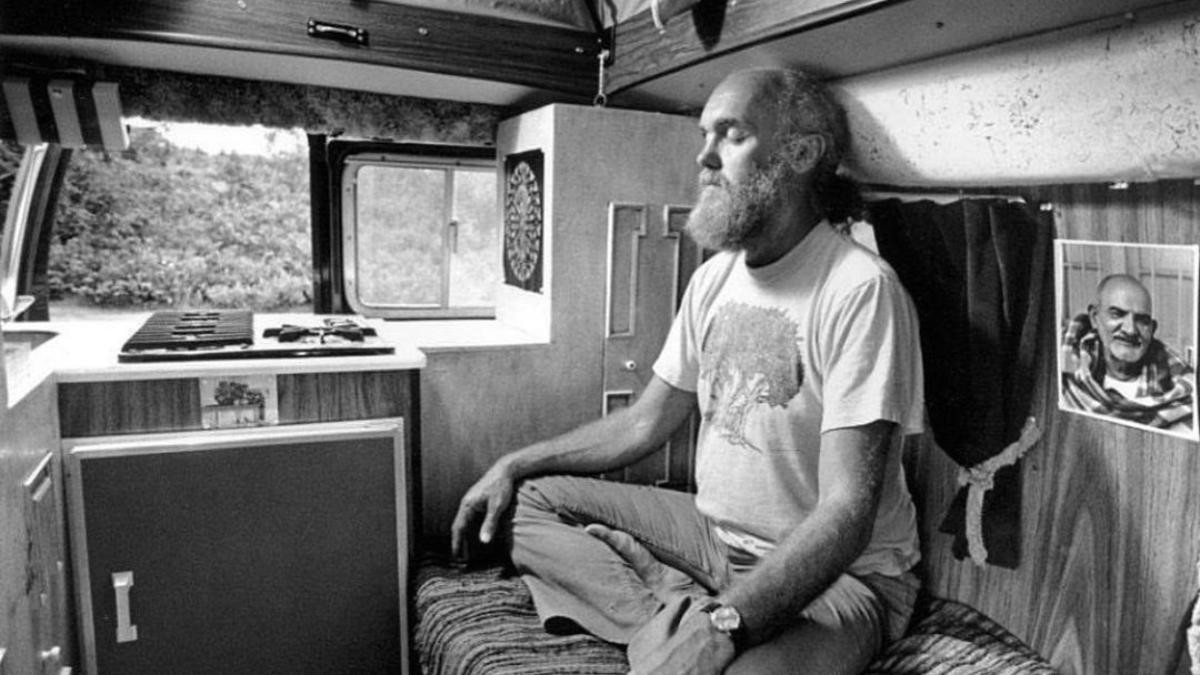 “Akaal. Akaal. Akaal.” I whispered that mantra when I read the news that Ram Dass had died on December 22.

He was a Harvard psychologist who popularized the use of psychedelics with Dr Timothy Leary in the early 1960s. Ram Dass, who was still known as Dr Richard Alpert at that time, went to India in 1967.

He then met Maharajji, a Hindu guru who later gave him the name Ram Dass, which means servant of God. Ram Dass had published many books throughout his life, from ‘Be Here Now’ in 1971 to ‘Walking Each Other Home: Conversations on Loving and Dying’ in 2018.

I begin to write a set of words to post on my Instagram story as a way to express how thankful I am for his works. But when I think about words, I immediately remembered what Ram Dass once said:

“We’re fascinated by the words, but where we meet is in the silence behind them.”

I stopped and asked myself, what is this “meet in silence” actually means? And here’s my thought bubble:

Imagine that you’re the early homo sapiens who felt the expansion of the brain. One day you wake up in the middle of savannah and find out that instead of screaming a sound of fear, you can say the word ‘fire’ or ‘danger’ and since your peers aren’t familiar with this sound of syllables, they’d understand it by looking at your facial expression or your aggressive body movement.

In this scenario, your words are not as important as your whole body movement. So, then why do we evolve to have a language? No one knows the answer to this question, but there are some theories about it.

A prominent linguist and philosopher, Noam Chomsky, stated that our linguistic ability is a by-product of evolution. As the brain expanded, we then begin to have the capability to form a language.

Another theory is that language is a product of adaptation.

For example, when we move from a plant-based diet to meat. This new diet requires more social arrangements and a new type of cooperative strategy. However, no matter what the reason for the first language to emerge, all of the experts in this field agree that in these billions of years of evolution, our language capability is a brand new skill compared to our emotional ability.

The word Akaal that I chanted three times is the Sikhism term referring to deathless or non-temporal implies everlasting reality, eternal being, or transcendent spirit; it further means eternity, being, or essence. What is interesting about that word is that it is similar to the word Aql in Arabic (which later becoming Akal in some Austronesian language) means reason. In Islamic Philosophy, Aql acting as a link between human beings and the divine.

In the Judeo-Christian religion, the higher being often represents through or as ‘The Word’. In Christian specifically, the beliefs expand that the Word exists at the beginning of the time, one with God and is God itself. What is so fascinating about the word “Word”, that ancient books’ writers used that term as related to or as God itself?

Some theologian argues that this is because the enlightened figure is speaking of God’s message; therefore, the writers refer to them as ‘The Word’. However, I think that this is not the case. If ‘speaking the messages’ is the reason, then it will be making more sense if they use the term “mouth” or “tongue,” so why word? To understand it, I need to look back at the evolution and the discovering of language.

Moreover, language freed us from the limitation of sound expression. For example, when an animal trying to communicate anger, all the animals can do is make an extremely intimidating louder sound that expresses aggression. As for humans, we can move our lips slowly and whisper, “go to hell!” or “God forgives you” — whichever you prefer. And the most revolutionary and beautiful thing about language is that it enables us to talk about language itself.

In October 1970, 13-year-old Genie was rescued after being locked by her parents for her entire life. Due to extreme isolation and lack of exposure to language during all those years, she had not acquired a first language.

In contrast to that story, there was a gorilla named Koko, who was born in San Francisco Zoo, 1971. Koko was known for having learned the American Sign Languages. Because of Koko’s exposure to spoken English, Koko understood roughly about 2000 words of spoken English, in addition to the signs.

These stories indicate that language is something we acquire with peers and is about cognition, not tongue and mouth.

Now you can complete the metaphor of Akaal and the word.

I could now understand that we weren’t just accidentally able to say a word. Words are like the persona, the tip of the communication iceberg.

Like when we say peace, the word peace is just a sound that we come out with recently, in this long evolution process, to express the desire that has been with us for billions of years. The most significant part of the meaning of peace exists not in the word ‘peace’, but in the whole experience of the word itself, which can only be fully understood by profound observation; to read between the lines.

When we say something, we did an internal process in which we were reviewing all the abstract and intangible things or meaning about something that needs to be express and then squeezed it into the mix of words that we think can represent that process of abstraction as a whole.

But how do we know that it represents the whole of it? How do we make sure the understanding that people get from hearing what we say contains precisely all the components in which we want to express?

This gap is the part where the Akaal plays its role; the reason, the higher consciousness, or in Ram Dass’s term, the shared awareness.

Therefore, a conversation is not merely an activity of sharing words but a kind of spiritual connection.

When we talk about something, let say, our feeling or stressful circumstances, we transcend our emotional state through the relationship with other humans and entering the bigger realm of awareness where this emotion emerge its ancient collective meaning, and then feels the oneness of being.

I think what Ram Dass meant with ‘meet in silence’ is to take another step beyond the words and understand the world as one soul in a shared awareness, the eternal being, the deathless and the timeless one; to understand and treat everyone as the divine expressing itself in various forms.

In the end, there is no beautiful way to express how thankful I am other than passing the compassion, so here it is: I wrote this article because of Ram Dass, and I dedicate it to the enlightened ONE, humans.