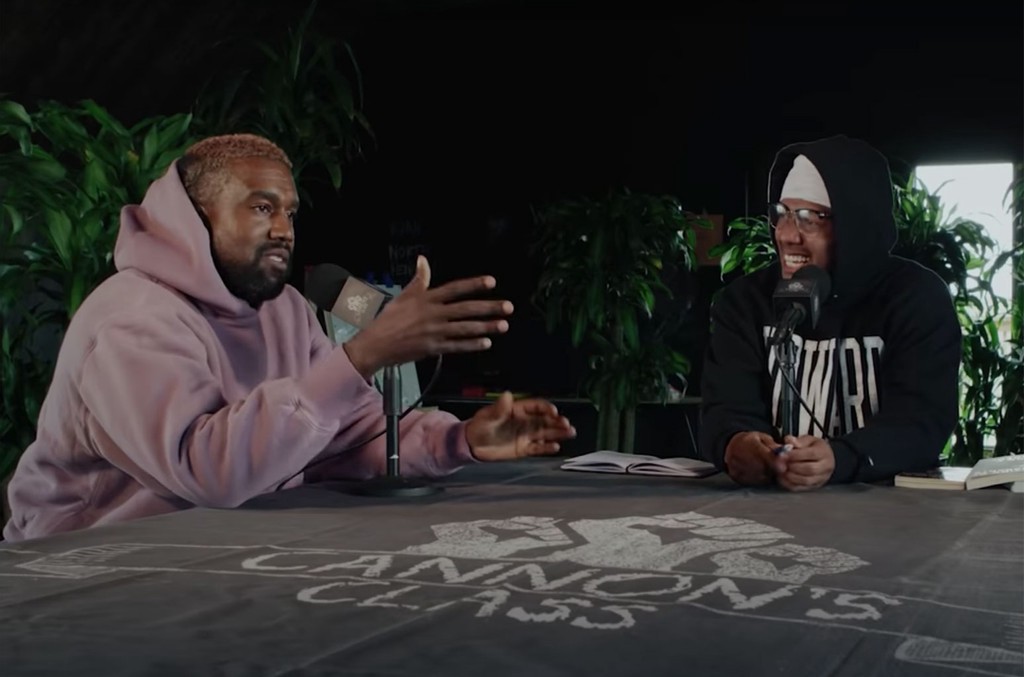 The following article does not reflect the political ideology or views of COSY as a publication.  Read more.
Kanye West (left) and Nick Cannon (right) on Cannon’s Class on YouTube via Billboard.com

Last month, my research on Planned Parenthood took me down the road of a clinic that provides affordable healthcare for women from all backgrounds.

This week, Nick Cannon released his interview with Kanye West on Cannon’s Class via Youtube. I was excited about this interview for multiple reasons, one of which being that I grew up watching these two men.

Nick Cannon was one of the first men I remember watching on Nickelodeon and supported him through everything he’s done through film, TV and music. Similarly, with Kanye West, I remember buying albums (when that was still a thing) and supporting his music and accomplishments.

But mainly, it’s fact that both Cannon and West have been making headlines for their controversial comments. Just to be clear, I do not condone Cannon’s antisemitic remarks. When the clip surfaced, he spoke openly in regards to something he clearly knew nothing about are reprehensible.

As for West with his past comments about slavery and his current moves with the GOP, it’s questionable what his motives are. In a time of civil unrest, West sitting at a table laughing and saying “I’m not running for president…I’m walking” just proves that he’s making a mockery of democracy. A dark contrast to the real world where people are fighting for change are still marching and protesting and innocent lives are still being taken.

The interview barely touched on their controversy or what West hopes to do as President, but Cannon did steer it toward West’s main political agenda during his rally — abortions and Planned Parenthood. As I sit and listen to them converse, it’s clear that they just don’t get it.

Margaret Sanger, founder of Planned Parenthood, was a devout racist whose goal was to reduce the Black population in America and she succeeded. 80% of abortion clinics are in minority neighbourhoods, over 22,500,000 Black babies have been aborted in 50 years. Over 1,000 Black babies are aborted everyday.

Confession time: When I heard this fact about the founder of Planned Parenthood, I was embarrassed. To have completely missed the research on why PP was founded and organised in the first place, it hit a nerve that I never came across it. However, I still believe the organisation has changed into something different.

We’re still living in an era where healthcare is being politicised and been made to choose who has the right to healthcare. More women from all socio-economic backgrounds rely on PP for many different reasons, not just abortions and yet that’s the only spotlight that the clinic holds.

Kanye West, who’s now a multi-billionaire (and made it apparent in his interview), has choices between some of the best healthcare options in the world, not just America. Even the birth of his last 2 children was by surrogates — not everyone has that option. At this moment right now, why should there even be a discussion to rid a clinic that protects and supports minority women [and men] even with its dark past?

Cannon: What do you say to people that are saying it’s about a woman’s right to choose?

West: Yes, but there’s two people involved, the father has a right to choose as well.

Even though I highly agree, it seems yet again, they’re missing critical points of pregnancies.

Those are high-risk moments in a women’s life carrying a child. Even Kim Kardashian, West’s TV-mogul wife, went through two very dangerous pregnancies publicly and had multiple emergency surgeries. Pregnancy is dangerous and not all women, not even Kanye’s wife, wasn’t able to carry that risk.

When he described their conversation of possibly aborting their firstborn, North West, it came like a moment of enlightenment. His wife was carrying a life, a soul just like his — which is ironic as Twitter constantly makes comparisons between the two as they are very similar.

Nevertheless, this is his own experience of pregnancy and childbirth. He’s married to a woman who is famously known for having a huge family that supports her, that doesn’t apply to everyone. To go through a process that can physically and mentally scar you, you need a strong support system. To also add, they’re able to hire help once the baby arrives and that option doesn’t apply to everyone — they say that it takes a village to raise children and from someone who was born in an actual village in Malaysia, it’s very true.

Their conversation lacks empathy in what normal people go through, not everyone has those options and safety. In looking at statistics of how many Black babies have been aborted and what is happening in their communities, they are also forgetting that Black women are more likely to die during childbirth. They’re fighting for their communities to survive but they’re forgetting that Black women are unprotected everywhere — even in healthcare.

Professional athlete Serena Williams and world-renown singer Beyonce both faced complications during childbirth. In William’s docu-series Serena, she explained that if she hadn’t been adamant to be checked for blood clots, she could have died during childbirth and that request had to be made multiple times before doctors decided to do it.

I’m aware that my views on women’s healthcare and abortions don’t relate to everyone. Last summer I lived abroad with a Republican from the South for a month and she explained to me how abortion is killing a person with a soul. It was a first for me to meet a woman of my age to have these viewpoints in regards to women’s healthcare.

“It’s not just about abortions, it’s about the right to choose,” I said to her, “But that unborn life didn’t get a choice” she shot back at me. She explained to me that when you’re pregnant, in the first trimester the fetus can feel pain. When I asked her even before the formation of limbs, bones and organs, “Yes” she replied coldly. It was funny, to me, listening to her political views on immigration, prison reform and gun laws in stark contrast to the fact that we were having dinner in Bali, Indonesia.

Sitting at that dinner table and discussing abortions and pregnancies, I’ve realised that it doesn’t matter that we differed in opinions, even as a woman, she thought my ideas were “too liberal.” But it’s not about what we thought and how we felt about each other, but the power that government officials have to take these options away from us.

As West speaks, it made me feel like I was at that dinner table again. Listening about the lack of humanity, but there’s no lack of humanity. I commended West for being able to be vulnerable enough to cry out about his daughter, many others did too. But using his agenda from a political standpoint makes it about him, and it’s not just about him at all.

When Cannon questioned, “What do you say about the people saying that the organisation has changed into something completely different”, he ignores it and continues to read from his phone about Sanger. His evading that question didn’t give me comfort, because minority communities need healthcare too. With a clinic that’s affordable and reliable, why shouldn’t we be open to new perspectives — unless my naiveté is blinding my judgment.