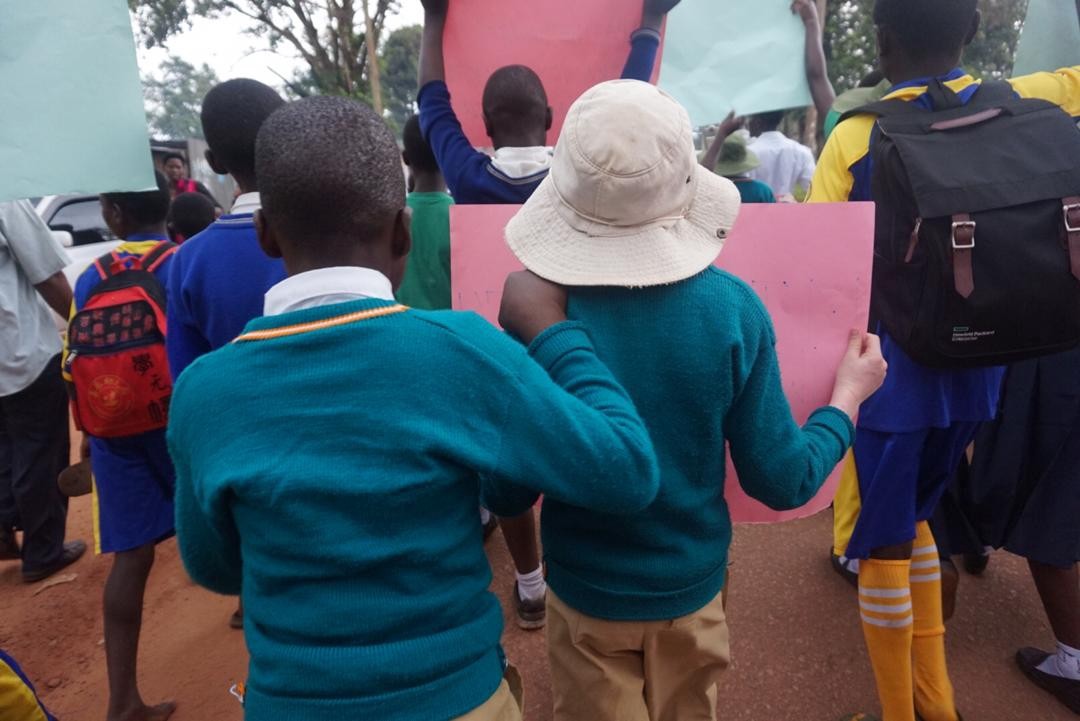 0n 3rd December 2019, I and my ICS teammates took part in an awareness-raising community action day where we marched through Bukoba town in Tanzania alongside deaf, blind, albino, and handicapped primary school students and teachers.

With DISABILITY IS NOT INABILITY written on most of our banners, I marched through town one by one mentally naming the various visible disabilities amongst our congregation. Unknowingly to myself, I would come to realize just how problematic this mental activity was.

As we marched past the hustle and bustle of the dala dala (bus) station, mango-selling carts and the town’s market (of which I frequently saw adults with shrunken or twisted limbs travelling on their knee caps and slipper-protected palms), the bannered message of which I had carried had not really registered in my mind.

It was not until our mass gathering of over 200+ protesting participants drew to a waist-rolling and heart-racing end, that such registry began.

Bums rolling, legs shaking, arms waving and — whilst being put to shame on the dance floor by a young male student with Down Syndrome — I saw no obstacles, only joy. In hindsight, my thoughts on people with disabilities had evolved.

I saw disabilities as unique puzzle pieces and tangential influences of a person’s character and not as a central influence that restricts mobility, capacity, or potential. Simultaneously, I began to search for the root for my unconscious bias, and slowly realized it was due to a lack of exposure to the various effects of disabilities.

Simply put, I was not used to seeing or engaging with people with disabilities who were African.

When was the last time you saw a group of people with (visible) disabilities and of African descent partying?

If you haven’t, click the link below to witness the dancing congregation that challenged my thought:

If your answer is similar to mine, it is because many people with disabilities are hidden. Physically, socially and in other ways, they are excluded from being seen as completely human and from participating as full citizens in society.

Negative attitudes towards disability in Africa

Stigma can be defined as “the convergence of interrelated components”. Thus stigma exists when “elements of labelling, stereotyping separation, status loss, and discrimination occur together in a power situation that allows them”.

Mostert expands this definition to explain stigma as a spectrum that is subject to change (from mild to severe) depending on the context it is applied. Rohwerder uncovers four general reasons that explain why disability stigma occurs in Africa:

1. Failure to understand the causes and resulting characteristics of disabilities.

2. False perspectives on the causes of disability (usually rooted in cultural or religious beliefs). For example, some communities perceive disabilities amongst children as a consequential punishment for the wrongdoings of a person’s parents or ancestors.

3. Because of this, disabled people are seen to be partially (and not completely) human and/or a reminder of an ancestral shame. This can also explain the abusive treatment against people with disabilities.

4. False conclusions regarding the nature of disabilities. For example, people believing that disabilities are contagious or that people with disabilities are unable to report sex abuse, attain normal relationships and contribute financially.

Though there may be similarities in the driving forces for disability stigmatization in Africa, it is important to note that attitudes vary across countries and communities within the continent.

Differences in attitudes towards disabilities across different groups and different disabilities can be seen for example, by the Chagga’s — an East African tribe dwelling in Tanzania — who have a view of handicapped people as pacifiers of evil spirits, versus the killing of people with Albinism across various ethnic groups in Tanzania from October 2006.

When talking about hidden disabled people in Africa, I define hidden as someone isolated or excluded from participating as a full citizen in their community. This exclusion can be physical and non-physical.

This explains why family members choose to hide their disabled relatives from being seen in their community, and why people with leprosy in Nigeria often choose to self-isolate indoors to avoid being seen, and stigmatized by members of their community.

The absence of dignity when engaging with people of disabilities is an example of non-physical exclusion. Meaning, there are incidents where non-disabled people treat disabled people as invisible or partially visible human beings due to disability stigma, thereby denying them dignity.

In Chitungwiza town in Zimbabwe, Rugoho and Maphosa reveal barriers to reproductive and sexual health experienced by women with disabilities and the lack of privacy and dignity they experience when using these services.

A 29-year old pregnant and blind schoolteacher reported that during hospital examinations, the staff examining her allowed other (non-examining) staff into the room to discuss her — the patient — amongst themselves as if she was not in the room. It is as if the staff assumed her blindness would result in deafness, or an inability to understand that she was the subject of their unprofessional conversation.

Either way, their actions showed their inability to acknowledge this woman as a complete human being who deserved to be treated with respect and not as the invisible subject of their gossip.

Suggestions for overcoming disability stigma in Africa include (but are not limited to) improvements in the implementation of the Convention on the Rights of Persons with Disabilities in Africa, anti-stigma educational programs, increases in stigma-related research in Africa and community-level engagement.

Our march through Bukoba town with banners that read ‘DISABILITY IS NOT INABILITY’ would fall into the category of community engagement, however, what personally confronted my unknown prejudice was direct engagement with people with disabilities.

Specifically, by directly engaging in everyday activities with them.

Therefore, I want to extend my experience, and contribute to the alleviation of disability stigma amongst African communities in and outside of Africa, by sharing snippets of the dancing that challenged my views earlier, and editorial images of the next young British-Nigerian model in the game, Mercy Bamgbala, who is the face of #downsyndromecampaign.

I hope to make you more familiar with seeing visibly disabled people living their (best) lives, in case you hold unconscious attitudes that I once held.

I also hope to see similar images out in the open, posted on the gram, and the front page of Vogue.

And lastly, I pray to see an end to the hiding of the people with disabilities across all communities in and outside of Africa.