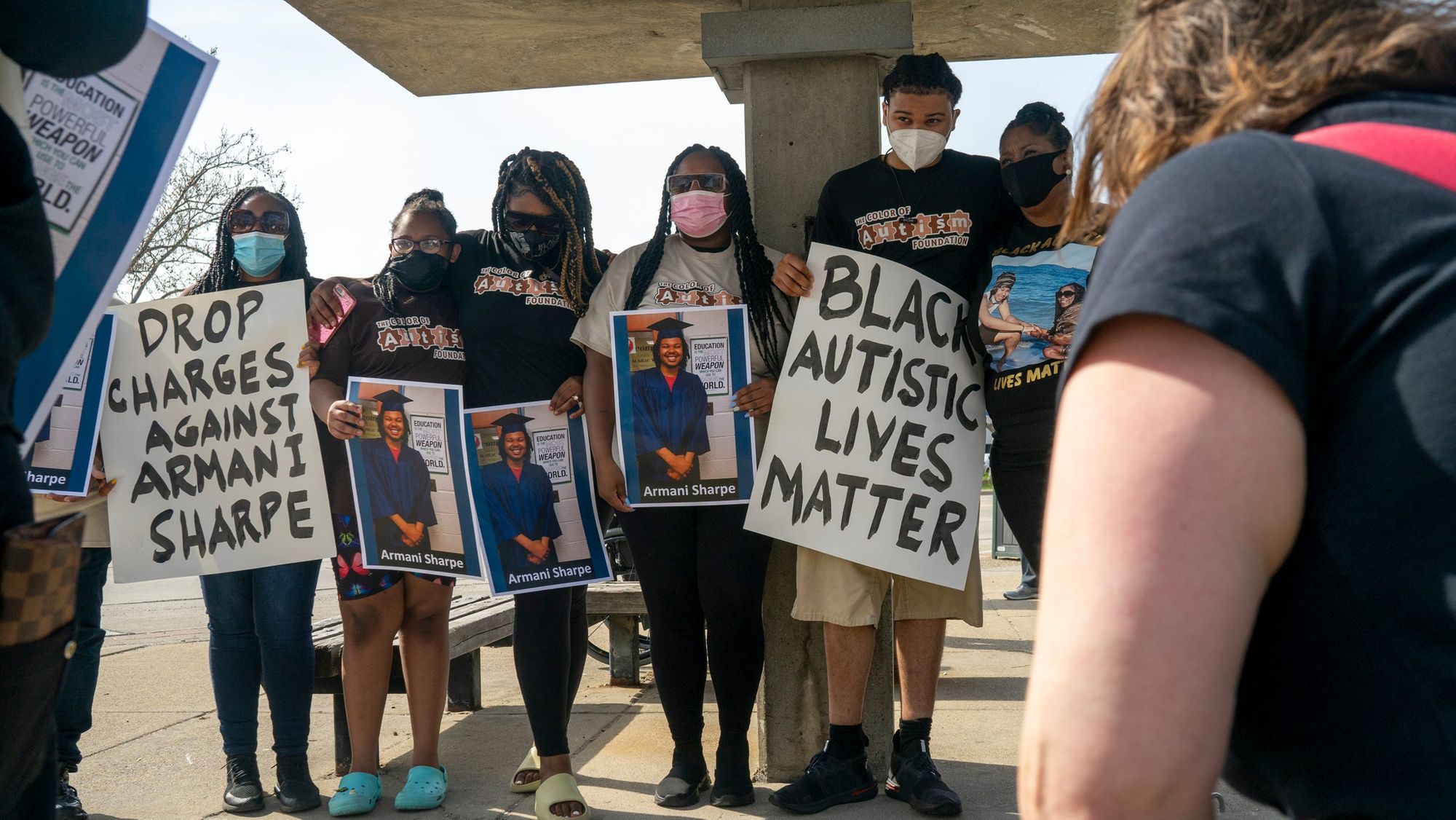 Update: As of August 25, 2021, all charges against Armani have been dropped in both Hazel Park and Ferndale!  Read more.

When Armani Sharpe was in the 3rd grade, he arrived at school one day to discover the teacher had rearranged the room. Although Armani had the same desk, the change in the arrangement of furniture confused him to an unusual degree. His distress at this change eventually led him to be diagnosed with autism.

Now, Armani is a 20-year-old, 6’2” Black man who enjoys being out in nature (even though he’s allergic to some trees and grasses!), watching Disney +, and the morning walks prescribed by his therapist. But lately, he hasn’t been able to take his walks.

He stays in his room most of the day and his mom, Monique Jewel, says he showing signs of depression. All this because Armani was wrongly accused of indecent exposure and disorderly conduct in two cities — Ferndale, MI & Hazel Park, MI — for the same event.

On Sept. 6, 2020, Armani set out for his usual morning walk. However, on this day, construction prevented him from taking his usual route. He had to reroute, which brought him to West End, a street that straddles the two cities of Ferndale and Hazel Park, both of which are predominantly white. As we walked, he was approached by two white women, both with dogs, who repeatedly asked him why he was in their neighbourhood and where Armani lives.

Changes in routine and transitions causing confusion are common traits of autism and one that Armani had been experiencing since childhood. Armani, already distressed from the new route, only grew more uncomfortable during the intense interaction with these women. He cursed at the women, telling them to leave him alone.

They called the cops.

When the multiple cops arrived, the women accused Armani of exposing himself to them and making lewd remarks. The interaction with the police, the women, and Armani were confusing. But Armani, who, like many autistic people, is not one to lie, consistently held that he had not pulled his pants down nor had he made those lewd remarks.

The police, however, sided with the women and charges have been brought against Armani in both Ferndale and Hazel Park, despite one of the officers knowing Armani was autistic from a previous interaction and announcing it to all at the scene. But a tall, young, verbal — but soft-spoken — Black man doesn’t, to many, “look autistic”.

When we look at common attitudes and assumptions about both race and disability, it is no surprise these women accused Armani of lewd behaviour. As someone who researches disability in the criminal justice system, I am all too aware of the ways race and disability can lead to these kinds of accusations, which have a long history with Blackness and intellectual and developmental disabilities.

Our country has a dark past of racial terror lynchings. Many of these murders were prompted by false accusations of a Black man assaulting, being interested in, or simply looking at white women. Think Emmet Till, whose accuser recounted her story over 60 years later. Think the Exonerated 5, who was falsely accused of assaulting a jogger in Central Park, but were incarcerated for decades before they were exonerated.

The image of what some call the brute caricature — which are portrayals of Black men as criminal, dangerous, and uncontrollable — has spanned centuries. From the end of the 1800s and through the middle of the 1900s, these portrayals replaced earlier depictions of enslaved people as childlike.

And even when it became socially unacceptable to write Back characters as brutish, the trend found other avenues: as, for example, crack-addicted violent criminals who emerged only briefly in police procedural shows. But the impact remains — remember Breana Harmon Talbot, the white 18 year old girl who, in 2017, claimed three Black men with ski masks kidnapped and raped her. It was all a hoax.

And then there is ableism. People with intellectual and developmental disabilities, like autism, have also had a long history of being associated with ‘unbridled sexuality', while simultaneously also being assumed to be immature to warrant sex education in school. We all read Of Mice and Men in high school wherein Steinbeck had Lenny kill a puppy and a woman.

Many times, people with intellectual or developmental disabilities are not only wrongly accused of sexual misconduct or assault, but then coerced in to confessing. Recent research by Melanie Clark Mogavero shows that both people with intellectual and developmental disabilities and those wrongly accused of sexual assault falsely confess. This puts Armani at risk of being pressured to confess, or accept a plea deal that will remain on his record.

He could end up like Edgar Coker, who at 15 was wrongly accused of raping his girlfriend, who later recanted. Edgar falsely confessed in order to avoid being sent to an adult prison. He was later exonerated based on constitutionally deficient defense but not before being incarcerated in a juvenile facility for 15 months and put on the sex offender registry until the age of 22. Like Armani, Edgar is Black and disabled.

The Risk for Armani

Being falsely accused of something like indecent exposure does not come without long lasting harms. If convicted, Armani could incur incarceration and hundreds in fines. Even if he takes a plea deal to avoid jail time, he will have a record follow him, making it difficult for him to work or even find housing. Not to mention the mental health impacts he is already experiencing that will continue to be exacerbated the longer this case goes on.

And if he has another run in with police, which given his Blackness and disability is a strong possibility, Armani is at high risk of harm. This case exemplifies the perfect storm of ableism and racism, which can be a fatal combination when police get involved. This risk is heightened if police see he has a record. Combined with the historic stigmas of unbridled sexuality of Black men and people with intellectual and developmental disabilities, an official record of being accused could significantly damage Armani’s future.

As a community, we must see that Armani gets justice. We must not allow the pressure of these charges and threat of incarceration push Armani to falsely confess or to accept a plea deal for something he did not do. Dropping the charges will help open his future and help his family move on. It will also, perhaps, help us as a community begin to question these historic assumptions about Black and disabled men.

This piece was written with the help and approval of Monique Jewel, Armani’s mom, Camille Proctor of The Color of Autism, and Lisa Franklin of Warriors on Wheels of Metro Detroit.