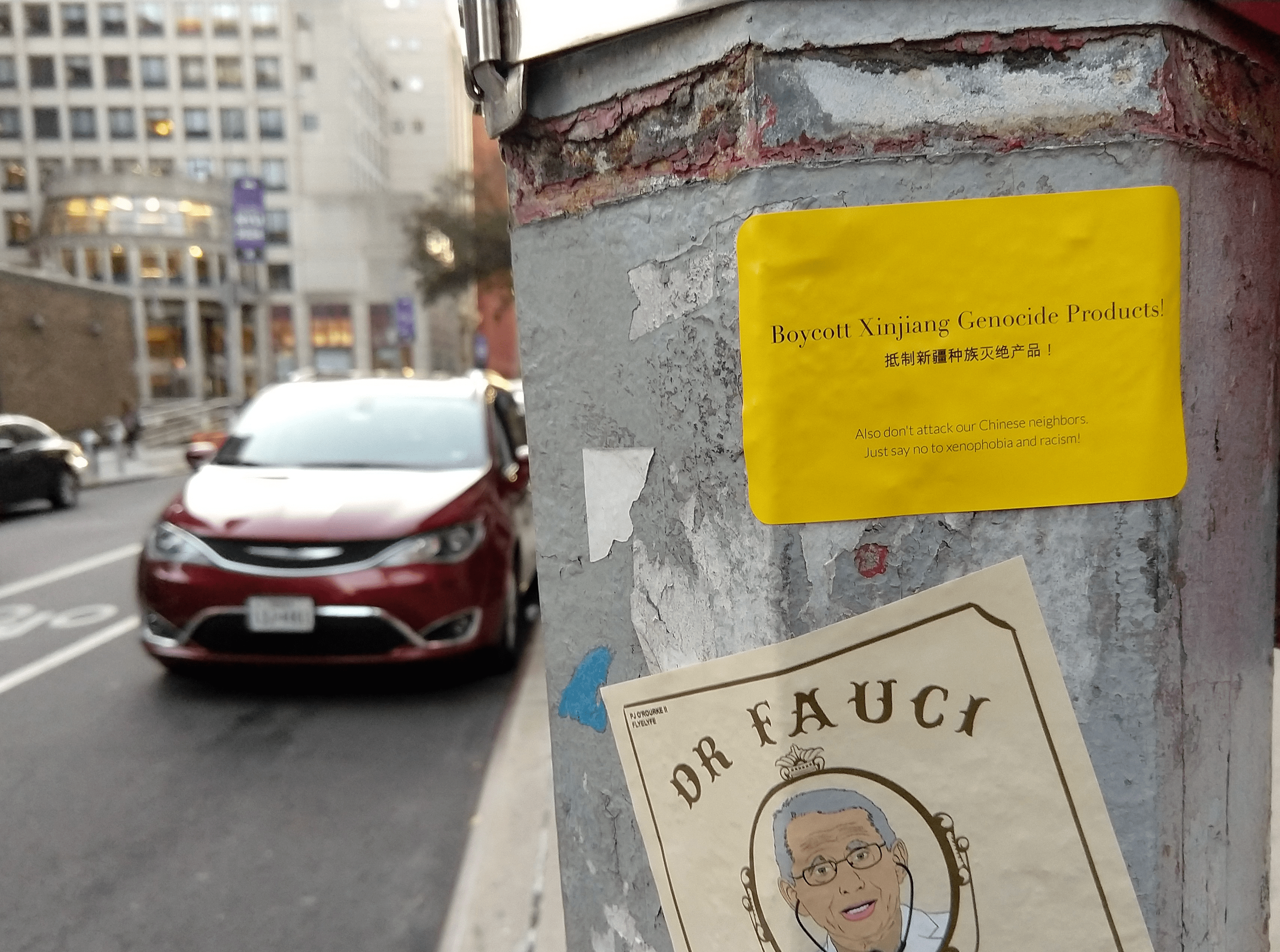 In December 2020, the UK chief rabbi wrote a piece to The Guardian, claiming he can "no longer remain silent about the plight of the Uighurs". Indeed, history has a regrettable tendency to repeat itself, and an atrocity similar to the holocaust is happening right before our very eyes whilst the rest of the world remains silent, helpless, or in some cases, complicit in it.

One thing we must not do, however, remains clueless about it. So my intention in writing this article is to give an overview of the situation for someone who wants to be informed without intimidation.

The Chinese government has been involved in a feud with an ethnic minority in China called the Uighurs, spanning several decades. They are culturally affiliated with the general region of Central and East Asia, and they are mostly Muslim. They are natives of China and settled in an area called Xinjiang, which was once considered the cultural hub of Uighur culture.

The Uighurs have a distinct culture from the majority of Chinese people (the Han-Chinese), holding different customs, languages, beliefs, and lifestyles. This has led many to push for a separatist movement, called the East Turkestan independence movement, calling for Xinjiang to become independent of the rest of China and govern themselves. This briefly happened until the new Chinese government at the time put a stop to it in 1949.

Due to several incidents of extremism from some Uighurs, such as the 1997 Ürümqi bus bombings, and most recently the 2015 Aksu colliery attack, the Chinese government felt something urgently had to be done.

The President of the People’s Republic of China, Xi Jinping had urged his colleagues to be, “as harsh as them,” he added, “and show absolutely no mercy.”

“The psychological impact of extremist religious thought on people must never be underestimated,” Mr. Xi told officials in Urumqi on April 30, 2014, the final day of his trip to Xinjiang.

“People who are captured by religious extremism — male or female, old or young — have their consciences destroyed, lose their humanity and murder without blinking an eye.” (Source: The New York Times)

Where did my family go?

Since 2015, it has been estimated that nearly two million Uyghurs have been detained in Xinjiang "re-education camps". At first glance, a "re-education" camp might not sound entirely sinister.

But given what we have learned in the past few years, they are better compared to concentration camps with the motivation of completely erasing Uighur identity, a step further to submit the entire nation to the communist rule of China.

When questioned, China originally denied this existence, but satellite images revealed camp after camp, with Xinjiang becoming emptier and emptier:

When students from Xinjiang returned home to see their family, they were instead greeted with documents informing them that their neighbours and loved ones had volunteered to be part of re-education camps.

Leaked documents revealed instructions to returning residents and the police on how to deal with the surprising news.

“Tuition for their period of study is free and so are food and living costs, and the standards are quite high,” officials were told to say, before adding that the authorities were spending more than $3 per day on meals for each detainee, “even better than the living standards that some students have back home.”

In one passage, a threat was clear:

“I’m sure that you will support them, because this is for their own good,” officials were advised to say, “and also for your own good.”

But what was the rationale? The documents insisted that the government was not arresting them, nor punishing them.

“It is just that their thinking has been infected by unhealthy thoughts,” so the script said — implying Islam is a disease of the mind that has caused some Uighur’s in the past to commit acts of terrorism. According to the government, such a disease can only be cured with the aid of communist propaganda.

State of the art facial recognition technology is being tested on surveillance cameras as a means to detect and identify people of Uighur descent. IPVM said:

“China users can simply send images of people, whether from phones or surveillance video, to the service, and if Alibaba (a major retailer in China) suspects a Uighur, it will flag the person.”

Social networks in China such as WeChat are closely monitored, and in some cases even contribute towards the imprisonment of Uighur people:

Mijit’s brother, who was drafted into the Xinjiang police force in the late 2000s, warned her to watch her language while using technology. “He always told me not to share anything about my religion and to take care with my words,” Mijit said.

She did not take part in the widespread WeChat conversations about religion. If her friends sent her messages about Islam, she would delete them immediately, and performed a factory reset on her phone before coming home to Xinjiang for the university vacation period. Her precautions turned out to be insufficient.
(Source: WIRED)

Now, it is estimated there are 380 suspected facilities in the Xinjiang region - some 40% more than previous estimates. These have been rapidly expanding, housing more inmates than previous notorious genocides, including Auschwitz.

What happens in these camps?

Some stories have leaked about what happens in the camps.

But why? The commonly accepted reason is for the Chinese government to end the Uighur race, increasing the ethnic majority of China to be Han-Chinese.

There have also been many reports about forced marriages occurring between Uighur women and Han-Chinese men.

Most recently, first-hand reports have confirmed systematic rape and sexual abuse of Uighur women by guards:

The women's camp was "tightly controlled", Sedik told the BBC. But she heard stories, she said - signs and rumours of rape. One day, Sedik cautiously approached a Chinese camp policewoman she knew.

"I asked her, 'I have been hearing some terrible stories about rape, do you know about it?' She said we should talk in the courtyard during lunch.

"So I went to the courtyard, where there were not many cameras. She said, 'Yes, the rape has become a culture. It is gang rape and the Chinese police not only rape them but also electrocute them. They are subject to horrific torture.'"

Aside from atrocious breaches of human rights through degrading, and falsely imprisoning and torturing Uighurs, many inmates are sent to forced labour which many Western businesses rely on. Reports have leaked that many brands in the fashion industry are becoming reliant on Uighur camps (not to ignore Western sweatshops in Pakistan and Bangladesh). But we’ll get to that in a minute.

Children are separated from their families, and sent to schools to erase their Islamic and Uighur heritage, only to be replaced by education in Mandarin, and encouraged to have an eternal love for the communist party.

China has long denied the allegations that the re-education camps existed. But once this fact became completely undeniable due to satellite images, they have insisted these camps do exist, but they are not prisons. They are schools, which Uighur’s have supposedly volunteered in great numbers to attend.

Hammering the point further, the Chinese government invited the BBC to a detention centre in Xinjiang in an unprecedented and surprising move. The harrowing footage is clearly a construction to hide the grotesque actions committed within the facilities.

Nevertheless, one cannot completely hide evil, and it reveals itself through the bruised eyes of an interviewee in this footage; even when Uighurs are forced to deny the allegations of false treatment.

Is anybody doing anything about it?

The plight of Uighurs has escalated exponentially in the past five years, and now the number of inmates has surpassed that of the Holocaust. So it begs the question - does anyone plan on intervening anytime soon?

It has raised eyebrows with the UN, and some politicians and officials have condemned China's clear breach of human rights. A letter of concern was sent to the U.N Human Rights Council about the growing number of detention centres, mainly by European countries.

But interestingly, and to some surprise, many Muslim-majority countries defended China's actions to prevent extremism in their region.

It appears that much of consumer capitalism is dependent on these forced labour camps in Xinjiang - with 83 major brands being implicated in a shocking report. All, but major brands such as Apple and Fila, have responded with statements denying their involvement.

Many high profile individuals demonstrate an awareness of what is happening, but many institutions are barricading any meaningful discourse or intervention.

"When Mesut Özil spoke out about the treatment of the Uighurs last year, Arsenal distanced the club from his remarks. Last month, Volkswagen defended its Xinjiang plant, saying there is no forced labour there. And the New York Times has reported that companies including Nike and Coca-Cola have pressed the US Congress to water down the Uyghur Forced Labour Prevention Act. Lobbyists say that, while they oppose human rights abuses, they fear the stringent legislation could cause unforeseen problems, in part because of the opacity of Chinese supply chains."
(Source: The Guardian)

As well as that, towards the end of 2020, the International Criminal Court (ICC) said it did not have the jurisdiction to bring a case against China over its treatment of minority ethnic groups in Xinjiang, as the country is not a signatory to the Rome Statute.

The sick conclusion many like myself are drawing day by day is that the Chinese government are close to successfully erasing Uighur identity.

What can I do about it?

It’s easy to feel helpless when you are aware of grave moral atrocities happening in the world, lacking any power to stop it.

But the truth is, as long as you are aware of the situation, and you want to make others aware of what is happening, you are at least doing something to show that you do not want to remain complicit with the unjustifiable breach of human rights occurring in Xinjiang.

In this article, I’ve linked some credible sources for you to engage in further reading should you wish to be informed on the matter.

Many protestors call for us to boycott products that are forcefully made by Uighurs.

But when major brands are involved, it is difficult to throw away basically everything you own — the sick reality is that your phone, clothes, shoes have the blood of Uighurs on them.

One thing I have done is to severely limit my consumption of things I don’t need and ensure (as much as possible) that the things I buy are not made by falsely imprisoned slaves.

It is difficult to conclude this article, as there is always more news coming out about this genocide. But for now, I hope you’re more informed about a situation that has been drowned in a lot of coverage about the Coronavirus.