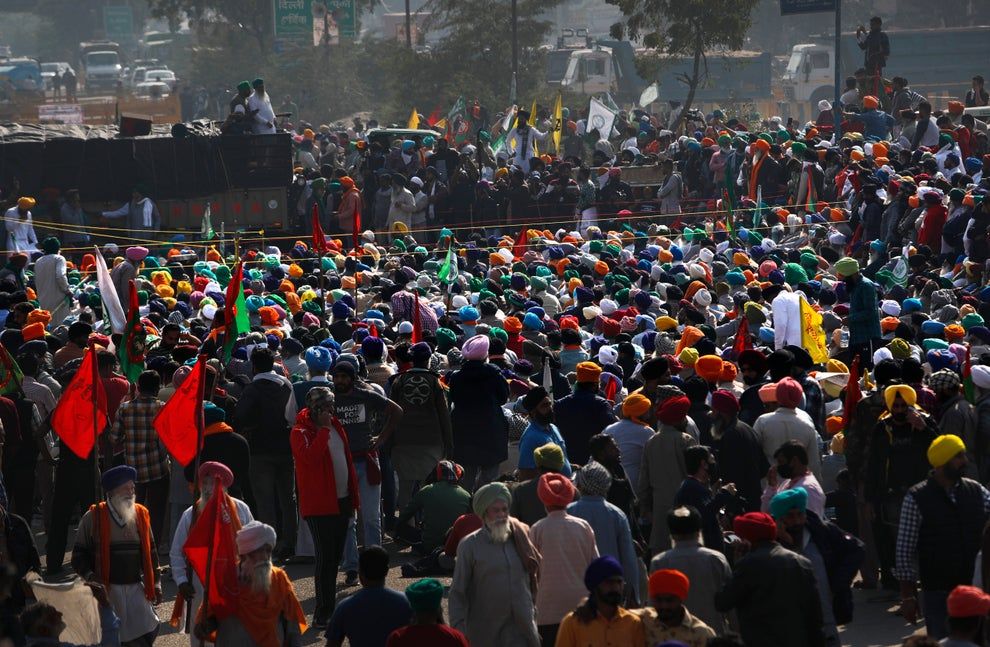 The Indian government is paving the way for corporations to take over the lands of farmers in India. My future feels black. I'm frightened that I won’t be able to do farming on my own ancestral land because the corporations will force me to sell it to them. We are all fighting for our survival.

Half a dozen of my family members are out there protesting. It's deeply affecting Gen Z, watching the illegal ways the people we care about are being treated by the government.

I have lost my faith in democracy, or that it's possible to live in a free and fairway. It has shattered all my innocence, hopes and aspirations in a very wild way. It's nearly impossible for me to study or even focus on my textbook because when I open it, nothing else comes to mind but glimpses of those shaking hands, and worried eyes fighting for basic rights they've worked hard for their whole lives.

All that remains is this very livelihood being snatched away.

When were these bills passed?

Three bills were passed by a voice vote (the quickest method of voting in the Indian parliament), which marked the beginning of this issue.

With nationwide lockdown closing down schools and colleges, the Indian government had a session passing these bills. When schools re-open and 250 million protestors are asking to discuss these laws properly, they are not having a winter session. This is unusual because every year the Indian parliament ends with a three-week-long winter session, typically held from November to December.

However, they are shielding their decision by claiming that food comes in the Union list, and the central government is supposed to make laws regarding food. This is one example of how the Indian government hides their true intentions by making its actions seem legitimate.

Recently, the BJP (Bharatiya Janata Party) government released a poster saying that these laws are in the favour of the farmers. it even had a picture of a farmer, Harpreet Singh, who has actually been sitting among the protesting farmers on the Singhu border (at Delhi - India's capital) since the first week of December.

How did things use to be?

The lands of farmers in India tend to be small, and marginal farmers don’t have adequate facilities to store their crop properly and sell it as soon as they harvest it.

Let's take the example of Punjab, an Indian state majorly affected by this bill.

The farmers are supposed to sell their produce in Agriculture Market Committee Ground APMC (or "Mandis" as we call it). There, the crops are sold in an auction with the Artiyaas, who buy them from the farmers.

The Artiyaas are government agents who get a 2% commission by acting as a middle man between the farmers and the government.

There is a Minimum Support Price MSP (valid only in Mandis), which is the price at which the bidding starts. Its purpose is to safeguard the rights of farmers, ensuring they can return a definite price on their crops.

In turn, the Punjabi farmers pay 8.5% tax, because they can only sell their crops and get an MSP.

So what's wrong with the new bills?

The bills are so well structured that an unassuming eye detects no flaw or error in them. In fact, you might even think they benefit the farmers. Yet the situation is quite the opposite.

We'll break them down one by one.

1. The Farmers’ Produce Trade and Commerce (Promotion and Facilitation) Bill, 2020:

This bill allows the farmers to sell their produce outside the Agricultural Produce Market Committee (APMC) regulated markets.

"What's the problem with that?", you might be thinking.

Surely, this would mean the farmers have more choice on who they want to sell to. They no longer have to pay taxes, which is beneficial for agricultural tech start-ups, or practically anyone who wishes to connect with the farmers.

But what this actually means, is that the Mandis operated under the APMC law will be abolished due to this Act.

Once these Mandis are shut down, the farmers will be forced to sell the crop to corporate companies at a lesser price.

No one will buy the farmers' produce at the minimum support price, which guarantees the safety net or insurance for farmers when they sell particular crops.

This means many farmers are at risk of receiving nothing for their crop, making their whole livelihoods redundant.

2. The Farmers (Empowerment and Protection) Agreement on Price Assurance and Farm Services Bill, 2020:

This bill makes provisions for the setting up of a framework for contract farming.

What this actually means:

What this actually means:

How are the government responding?

The farmers are protesting against all three laws by the centre. Instead of taking this bill back, or engaging in meaningful discussions, the farmers are being stopped from protesting peacefully by firing water cannons on them.

Such kind of injustice on farmers is not fair. Peaceful protest is a constitutional right.

To date, there have been 32 lives sacrificed including 2 suicides because they could not bear the government's unfair treatment, with which their fraternity is subjected to.

Why is the national media not taking notice?

If we believe media is the fourth pillar of democracy, we are practically standing on a tripod. It’s one of the world's largest protests, and yet it's not fairly covered by the national and international media.

The media is mostly showing the ruling party's side that the farmers are smashing the barricades, littering the streets of Delhi.

But the ongoing situation is quite the opposite, as the farmers are cleaning the streets thoroughly. As it turns out, they were throwing away the barricade to make way for an ambulance.

Recently, they were criticizing the farmers for eating pizza at the protest, and their kids speaking English as well as Punjabi very fluently.

They consumed pizza is in the news, but what never came in the news is that 10200 consumed poison and ended their lives. They worked in the fields so hard to afford private education for their children, because the government failed to provide it themselves.

The farmers are being failed on multiple levels. Governments are built on the trust of the people, but this is an example of the government failing them. Security personnel is someone we should be able to trust, but they too failed them by using water cannons and tear gas.

In such a case, the media is often the last and only resort. But haven't just failed them, but also stabbed them in the back. While they say that truth is the first casualty of war or conflict, trust is also a major casualty.

So now when the reporters come at the border, they are greeted with slogans of, "Godi media, go back.”

“Godi media” refers to the media organizations which are “lapdogs” of the Narendra Modi government. What they are doing is gathering a few old and uneducated people, and grill them on the technicalities of a bill to manipulate the facts.

But the news media is in a crisis of its own. There have been brutal layoffs and pay cuts. The best of journalism is shrinking, yielding to the crude prime-time spectacle.

Despite all this, the farmers are in Chadhdi Kala (a belief in Sikhism to always be in high spirits). This poem I found, sums it all:

The Langars are the free community kitchens started by the Sikhs, not 'terrorists' as some of the media suggests. They are also not just feeding the farmers camped at the border.

They have also come as a boon to several underprivileged people in the vicinity of the blockade, as well as countless homeless people who otherwise would have struggled for even one square meal a day.

The Langars now treat them to regular meals and tea - served three times a day - with fruits, kheer and sweet rice as prasad (offering) and snacks.

Most of the beneficiaries of the farmers’ goodwill are scrap collectors, and the used paper plates and plastic items from the Langars also ensure them their daily livelihood, without having to go scouting for discarded items.

There has also been free distribution of winter wear, peanuts, dry fruits, milk, and protein shakes.

Now many people have even volunteered to tutor the children at the protests, even going so far as to set up washing machines.

What is the Khalistani Movement?

The Khalistan movement is a Sikh separatist movement seeking to create a homeland for Sikhs by establishing a sovereign state, called Khālistān ('Land of the Khalsa'), in the Punjab region. The proposed state would consist of land that currently forms Punjab, India and Punjab, Pakistan.

It was an armed secessionist struggle led by the Sikhs of Punjab, in northern India and the arms were its only flaw. It was a result of the suppressed anger, because the Indian central governments have always overlooked the needs of the minority communities, and divided them based on religion to make a particular group their vote bank.

Needless to say, the conditions have worsened under Modi.

Digging deeper in Punjab, the Hindus constitute around 38% of the total voters. You can imagine what happens when thirty-three per cent of votes come out on one side. Ever since the Akali Dal (a popular party in Punjab) ended the alliance with the BJP, they started preparing a strategy to establish its hold within Punjab.

By giving a ‘Khalistani colour’ to this Kisan (farmer) movement, the BJP is trying to gain the sympathy of Hindu voters in Punjab.

I feel that the BJP neither has any prominent Sikh face to represent it nor do they have anyone who can show a major one in upcoming elections.

Now somewhere, I think this is probably a golden opportunity for the BJP and those leaders to set their feet firmly in the state. Is the BJP trying to shine its Hindutva politics by giving a ‘Khalistani‘ angle to the farmers’ dharna?

In the protracted negotiations that preceded the partition of Punjab in 1947, the idea of an independent Sikh state figured prominently. The Sikh population lacked numerical strength about other residents of Punjab, making this an unviable proposition.

But it has resurfaced in various forms since.

In the 1970s and ’80s, a violent secessionist movement to create Khalistan paralyzed Punjab for a decade. It received support from the All India Sikh Students’ Federation and was led most effectively by Sant Jarnail Singh Bhindranwale.

But some Sikhs oppose the Khalistani movement.

Sikhism lays stress on ‘Sarbat da Bhalla (working towards the common good of all) and 'kar seva' (doing physical work for the common good). These two ideas are part of the Guru Granth Sahib spiritual ideology.

The Sikh farmers of Punjab were the first to grasp the danger when Parliament passed the three controversial bills in a great hurry, without a discussion or taking farmers’ unions into confidence.

The Sikh farmers are now part of a strong global community, with agrarian production knowledge as their backbone.