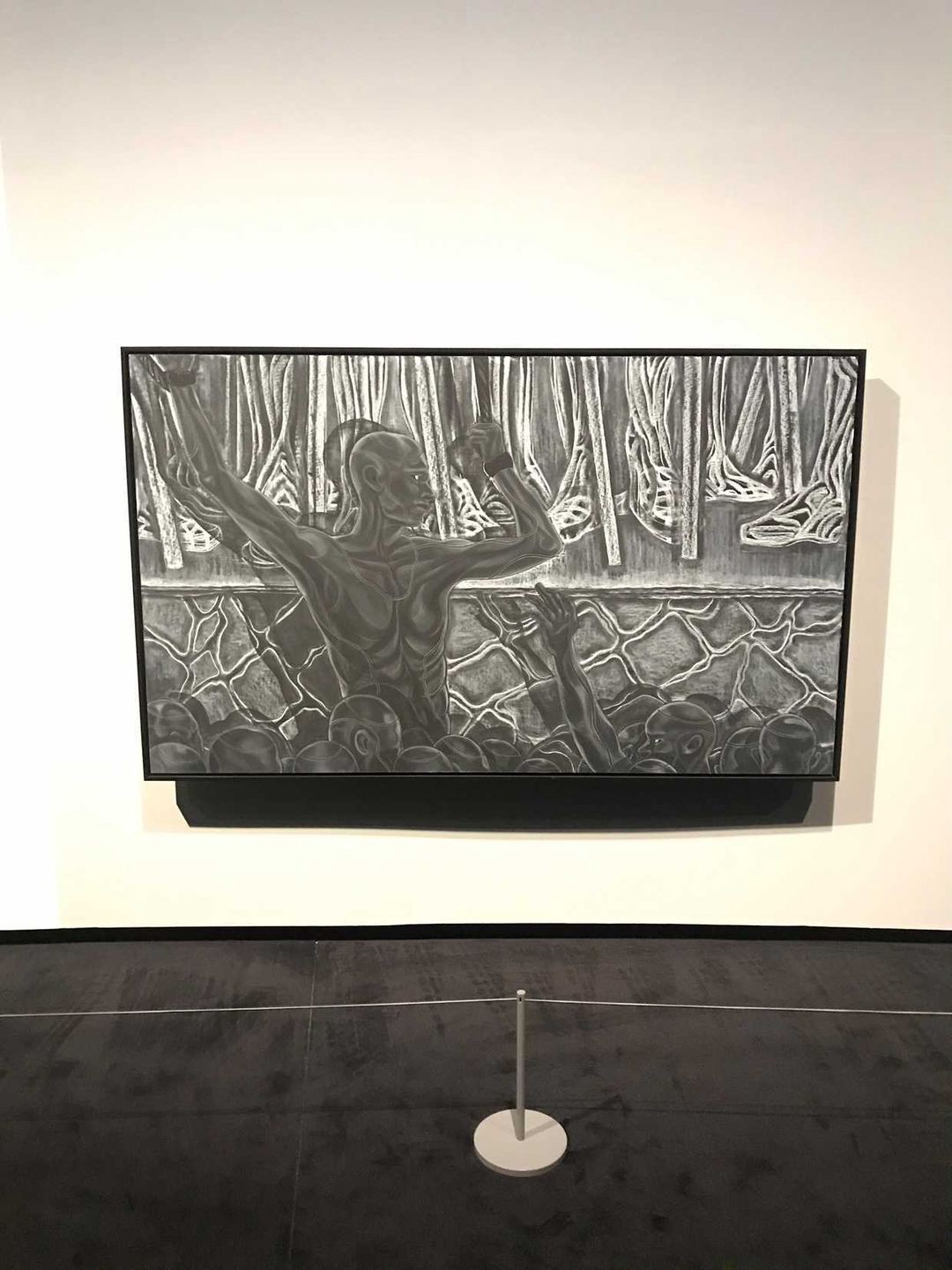 Renowned Nigerian-American artist Toyin Ojih Odutola unveiled her contemplative and unconventional exhibition ‘A Countervailing Theory’, which narrates the fictional history of an ancient Nigerian civilization composed of women warriors (Eshu), and their subservient male labourers (Koba). It was featured at London’s Barbican centre earlier this August.

In Ojih Odutola’s 40-imaged theory, neither group is allowed to develop sexual or emotional relations with the other gender, however, in this episodical body of work, we witness the consequences of when heterosexual entanglements are formed and are left to imagine the implications they have in this mythical society.

Toyin explains the inspiration for the exhibition is rooted in the non-fictional discovery of black shale rock in Riyom, Plateau State, Nigeria by a mining Chinese company in 2009. The Jos Research Initiative (of which Ojih Odutola directed) have said their initial findings allude to the existence of an ancient civilization that predates the Nok civilization (the oldest civilization known to have dwelled in Nigeria).

She also credits Octavia E. Butler’s science-fiction literature as another inspiration for this piece, particularly when choosing to present these humanoid characters as monochrome figures as explained in her Talk Art interview.

In the following interview, Toyin emphasized how she did not want her audience to focus on the blackness of these characters hence her use of a monochromatic display. She explains people tend to stop at the sight of blackness (in awe or amazement in her drawings — which is not a bad thing as black skin should be admired, however), people fail to further explore the story that is being narrated by the landscapes and other intricate details not about the pigment of a character’s skin when they focus solely on their blackness.

Therefore, ‘A Countervailing Theory’ is an exploration of blackness, specifically African mythical history in Sci-Fi, mixed with a non-fictional geological starting point. This layered monochromatic saga encourages you to dwell on the landscapes and postures performed by each character for you to think deeper and contribute to the narrative Ojih Odutola presents.

The most captivating and thought-provoking details of this mystical theory are the subversion of social hierarchies amongst the two genders and the queer twist which underpins this narrative. Interestingly, the queer element brings to memory Nigerian Artist and self-taught photojournalist, Yagazie Emezi’s ‘Present and Forgotten — An Amalgamation of Igbo culture’ fashion photography shoot.

Emezi’s history-layered fashion shoot contains imaginary elements of Emezi being invited as a guest to the home of a same-sex married couple, versus the non-fictional reality of same-sex marriages (amongst women) existing in pre-colonial Igbo culture. Emezi is therefore telling us the present and forgotten existence of female husbands and how women can and could (as dictated by Igbo customary law) marry each other after the death of their husbands and if they had no children within that marriage.

She tells us more about what inspired her to do this shoot and narrate this story in an interview with Narrating Africa.

Narrating Africa: What inspired you to tell this forgotten history and what do you want people to take away from this project?

Yagazie Emezi: I never have a wish for an audience to interpret my work in a specific way as I have no control over how it is interpreted. The broader goal is education which can manifest differently for many. I chose to focus on this element of fading and forgotten history because I saw an opportunity for cultural rejuvenation and preservation. As an Igbo woman, my work naturally touches on identity. Each project is often a time to dig deeper and learn more about self and those before.

Narrating Africa: Why did you choose to tell this story specifically through a lookbook?

Yagazie Emezi: It was a commissioned piece so the decision to use a lookbook wasn’t mine. The client wanted to pull from aspects of Igbo culture and history so my approach was very selective as I didn’t want to use current practices of my cultural identity for a foreign brand’s profit.

Narrating Africa: Were the garments designed specifically for this Igbo narrative?

Yagazie Emezi: The garments were made specifically to fit the client’s focus on Igbo culture which in a way, helped cement the work to be more Igbo, than a thing for a client. The clothes were made by an Igbo man, the art elements were made by Igbo women. The presence of such made the work Igbo before anything else.

Narrating Africa: Looking back on this project, if you could redo this shoot is there anything you would do differently? Yes or no and why?

Layered on The Curve (the Barbican’s 90m curved exhibition wall) are each of Ojih Odutola’s 40 charcoal, chalk and pastel drawings. Every drawing unfolds as an unforeseen episode accompanied by Ghanian-British sound artist, Peter Adjaye’s eclectic and experimental soundscape which creates eerie anticipation and a sense of urgency as you progress through the dimmed-lit Curve.

A video review of the exhibition by Narrating Africa.

As I progressed through this mythical series, I witnessed spectators transition into assistant storytellers as they attempted to give meaning to the surreal landscapes, facial expressions and body languages of these fictional characters. I found myself searching for answers as to why Ojih Odutola had made the eyes of both genders resemble what looked like the Earth.

For me, this was the most visually captivating element of the exhibition. Maybe it is because our sight of these characters inform us of an imaginary world that could have been according to the artist, that then caused her to give them earthly eyes? Or it is because we are looking into their world? Either way, I am not sure of Toyin’s reason for this enchanted detail however, I highly recommend you experience this exhibition in person if you can so that you can be a part of this storytelling experience.

A Countervailing Theory is open from 11 August — 24 January 2021 with free admission when booking before visiting the exhibition.

If you are unable to visit the Barbican, you can engage with this exhibition by purchasing the official exhibition poster and the Toyin Ojih Odutola catalogue.