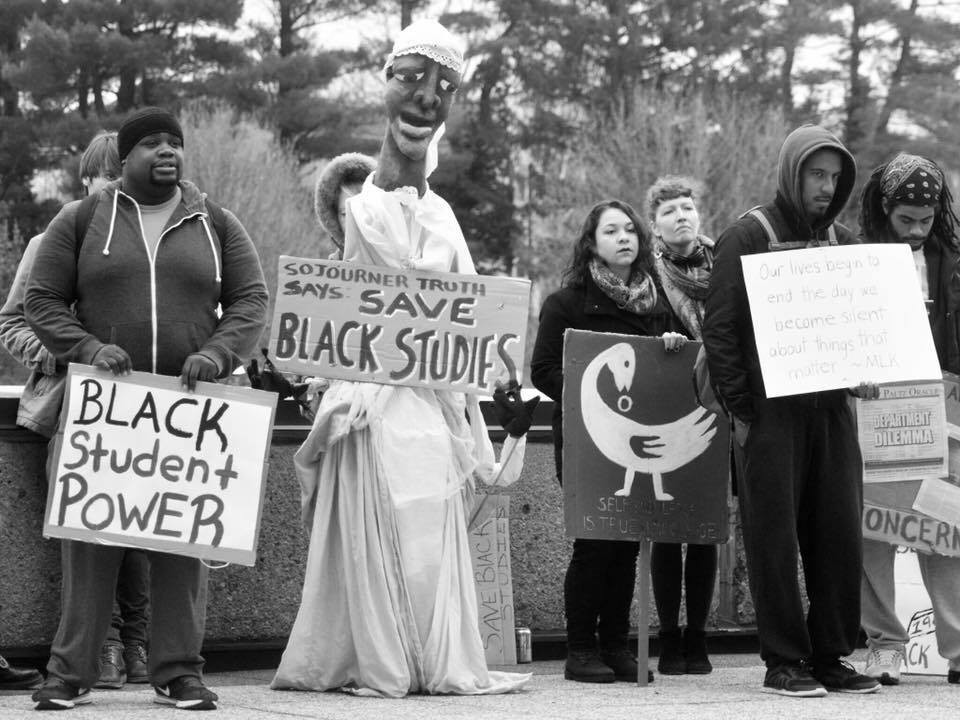 Students demonstrating for the preservation of the Black Studies Department (2015).

Institutional antiBlackness is no new phenomenon. And this is mainly so because even throughout the Black Studies Department’s inception, established in 1969, it was episodically undermined for its existence as a department:

The SUNY New Paltz Black Studies Department was established in 1969, making it one of the longest-running such departments in the nation.

The history of Black Studies at New Paltz dates back to 1967, when faculty and administrators, directed by then-Interim President John H. Jacobson, began planning what would become known as Project A, an effort to provide financial support and academic advising to students of traditionally underrepresented demographics, consistent with the College’s mission to provide access to quality higher education to all New York residents.

In the most literal sense, the SUNY New Paltz Black Studies Department is not a department for the reason that its architectural existence is inconspicuous to students.

If and when it is located, it is found in one of the crevices of what appears to be a trailer park—where the department is lodged in between the Mathematics department, making it almost virtually unnoticeable.

For fifty-one years, notions of progress — diversity, have been used inauthentically by politicians (local and nation-wide) to establish a feigned sense of camaraderie between them and the people.

As a crippling result, we have only seen fleeting instances in which the administration of SUNY New Paltz has ever kept to its word in fomenting authentic diversification for its non-white students and residents.

Because of the severity of this ongoing happenstance, it goes without saying that the majority of the Black (and unanticipatedly the white) student body, collectively assents to the apathy, disregard, and disrepair of the department.

As a result, many, if not all Black students, both residents, and non-residents have never truly been given the rewarding opportunity of indulging in a humanistic experience at the college.

Black people, in predominantly white spaces, inevitably have had to position our ontology to whiteness — as a discomforting end to a means — in an attempt to procure and receive academic accolades, occupational opportunities — stepping up the letter, if you will.

The Negro recognizes the unreality of many of the beliefs that he has adopted with reference to the subjective attitude of the white man. When he does, his real apprenticeship begins. And reality proves to be extremely resistant. But, it will be objected, you are merely describing a universal phenomenon, the criterion of maturity being in fact adaptation to society (116).

Often have I glimpsed through the campus, and seen my people among their own (and for healthy and precautious reasons). I have also understood that these precautions were out of self-defence, uncertainty, anxiety, depression, and alienation.

Black students feel alienated from the campus despite navigating from class to class. In fact, making it to class has perhaps been the main objective above all else.

I do not speak for my people, but I can imagine that many have justifiably refused to articulate that it indefinitely is not what constitutes a so-called second “home” for them.

As we may receive/ed opportunities to advance up the capitalist ladder, the educational policy of SUNY New Paltz has much to be desired for its Black students and Black residents. Writer Michael J. Dumas, who writes in his essay, “Against the Dark: AntiBlackness in Education Policy and Discourse,” attests to the abhorrent reality of institutional antiBlackness. Dumas states:

What does it mean to suggest that educational policy is a site of antiBlackness?

Fundamentally, it is an acknowledgment of the long history of Black struggle for educational opportunity, which is to say a struggle against what has always been (and continues to be) a struggle against specific anti-Black ideologies, discourses, representations, (mal)distribution of material resources, and physical and psychic assaults on Black bodies in schools.

During the years of state-sanctioned slavery, white slave owners would often beat their Black property for attempting to learn to read; for Black people in bondage, learning to read was understood not only as a pathway to economic mobility, but, perhaps more importantly, as an assertion of their own humanity […] a century later, Black children faced down snarling, spitting mobs of white parents and elected officials who were incensed that their own white children would have to sit next to Black children, and fearful that their white education would be sullied by the presence of the Black.

And this, then, is the essence of antiblackness in education policy: the Black is constructed as always already problem — as nonhuman; inherently uneducable, or at very least, unworthy of education; and, even in a multiracial society, always a threat to what Sexton described as “everything else.”

As with all that has occurred with the recent white supremacist-state-sanctioned murders of Tony McDade, Breonna Taylor, Rayshard Brooks, and George Floyd, it was inevitably a matter of time until Donald Christian, the president of SUNY New Paltz, remarked on what he has designated as “incidents.” Subsequently recapping the removal of European settlers’ names on the campus buildings, Christian has assured the student body that they would be continuing their educational experience.

He has presented an enumeration of resolutions such as the furtherance of the Black Lives Matter at School project and the implementation of University Police Department implicit bias training. This is nowhere near enough.

Ultimately, it is the president and the administration who must make themselves aware and account for the fact that the SUNY New Paltz experience will never be the same, especially for its Black scholars and if making the decisions to start with defunding the campus police concurrently while allocating those funds to the infrastructure of the Black Studies department and reimbursing the scarce number of Black faculty and Black staff we have on campus are not in crucial consideration and implementation, the SUNY New Paltz experience will always be an alienating, vapid experience for Black people for future generations to come.