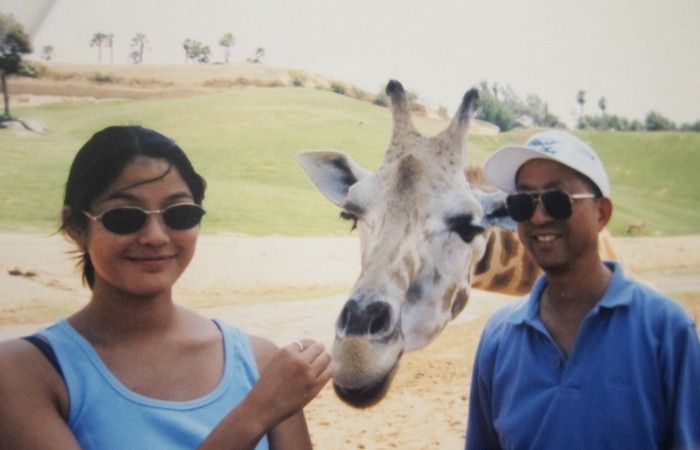 Lynn Chen is an actor with over 50 credits in TV, Films, Audiobooks, and Video Games. She made her filmmaking debut with the 2020 SXSW film "I Will Make You Mine," currently streaming everywhere now.

The last week of summer, before I went to college, I slept in a bathtub.

It was actually a really nice one. Jacuzzi jets, enough room for 2 adults or 3–4 medium sized children. In a hotel. In San Diego. It seemed super fancy to me at the time, but looking back, I think it may have been a Marriott with a view of the freeway.

I had never witnessed a duvet covered with white linens, a big step up from the worn, unwashed motel comforters I’d come to expect on vacations. Our room had two queen sized mattresses, but after our first night there, the bathtub became a much more appealing option than sharing the same room with my father. He snored.

It was surprising how loud he could get in his sleep. When he was awake, he was so quiet. People would ask him questions and he would either nod his head yes or no, fists tightly clenched. You knew he was listening because his eyes blinked quickly, processing whatever was being said.

My father and I were on the west coast for a corporate retreat. Neither of us had ever heard of, or been on one before. But he informed me that this was “a very great honor” — that he was being rewarded by his job for all of his hard work.

They called it “The Achievers Club,” and I don’t know what he achieved to earn it. I don’t think he did, either.

My father worked in data processing for a payroll company. His position sounded boring to teenage me. I am sure whatever he achieved was incredibly uninteresting, too.

Every year “The Achievers Club” gathered in some random U.S. City, where top employees (and their guests) were treated to an all-expense paid vacation filled with unforgettable, luxurious experiences and opportunities to corporately bond.

My mother should’ve been the one to accompany him, but she stayed home in New Jersey. Her work schedule was too demanding and she couldn’t take a vacation.

Looking back, she definitely could’ve taken the days off. I think she was trying to keep me from my senior year boyfriend — a relationship that I carried on without her blessing because I wasn’t supposed to be dating (not until college).

Maybe she thought it would be a good bonding experience for me and my Dad. Or, maybe it was because she didn’t want to face the truth — that the charming PhD student she’d fallen for had immigrated all the way from Taiwan to become an awkward computer nerd.

My Dad was the only Asian in The Achievers Club. At least, it felt like he was. We were definitely the only father-daughter duo. Everywhere I looked: white, middle-aged couples in khaki shorts and pastel polo shirts.

“Hey, George!” Turquoise Polo said to my Dad, which sounded weird to me because his name was actually Fu-Yen.

“Who’s this?” he asked, nodding at me. I wore a Phish shirt with the collar cut off, which he squinted at with amusement: “Phoot Loose and Phancy Phree?”

I answered that they were my favorite band, and that I should be touring with them in New England this week.

“Yeah, I once followed Billy Joel on his Storm Front tour,” Turquoise Polo sympathized. “Something everyone should do while they’re young. I have a son your age, and there’s no way he’d be here with us. He’s probably throwing a party in our house right now!” His wife nodded and chugged her martini.

That evening, as I lined the bathtub with every extra pillow and cushion I could find in our hotel room, I asked God why I was being punished. I turned off the lights. There were no windows in the bathroom and I was suffocated by complete darkness.

Sleeping in a coffin. I should’ve been standing in a Shop Rite parking lot with my friends, stoned and/or drunk, working up the nerve to crash the popular kids’ party.

This would’ve been my one and only chance to see what their world was like — the single time I didn’t have to fear rejection, or risk humiliation at school the following year. I fantasized about the captain of the football team, who ignored me in AP European History and even as we walked together at graduation a few days ago.

Surely tonight he would talk to me, since I would’ve brought my yearbook. And maybe he would’ve signed it: “Dear Lynn, I always secretly thought you were really cool and — ” KNOCK KNOCK KNOCK — it was my father. He had to take a piss.

The next morning we were watching an Air Show, which was basically an excuse to drink mimosas in a tent and watch jets fly overhead. I was loudly explaining to my father what an omelet station was when I heard our names being yelled.

Turquoise Polo (now Navy Blazer) was waving us over to his table. Two empty seats had been saved for us. I began to walk over with my bowl of corn flakes when my father stopped me.

“Where are you going?” he asked in Chinese.

“I’m just going to put my cereal down.” He looked incredibly worried. “Do you not want to sit with them?” I asked.

“Dad, I honestly don’t care. They’re not my friends.”

“They’re not my friends either.”

It was our turn with the omelet chef, whose name tag read Eduardo. He had several empty earring holes, and I noticed a tattoo on his inner wrist as he flipped a few pans.

He looked hungover. “What would you like?” Eduardo asked us.

“Whatever she’s having,” my Dad replied.

“I’m not having eggs,” I informed him.

“It’s too heavy for breakfast.”

He switched into Chinese again. “But the company is paying. You should eat something more than just cereal. You can have cereal at home.”

“Dad, I don’t want an omelet. Just tell the chef what you want.”

Eduardo sighed. The butter pat he had sizzling away in the small nonstick skillet was starting to burn. My father glared at the chopped up vegetables, the shredded cheese, the truly mysterious meat.

I could tell he was overwhelmed. The last time we had eaten someplace without a Chinese menu was at a greasy diner off the Jersey Turnpike, where he’d made the rookie mistake of ordering Halibut instead of a burger with fries.

Realizing he might very well ask Eduardo for a Taiwanese Oyster Omelet, I decided to step in — “Spinach, cheddar, and turkey with salsa.”

Eduardo got to work. “Medium or spicy?”

My dad usually poured La Jiao (Chinese chili sauce) all over everything at home. “Spicy.”

We stood in silence as Eduardo quietly transformed the ingredients into a small work of edible art.

He slid the eggs onto a plate which my father took, fascinated. “Did you see what that Mexican boy did?” he asked as we walked over to the table. “That’s the American Dream. It’s all about technique and practice.”

We sat at the table. Navy Blazer immediately handed my father some ketchup and Tapatio, and he eyed the bottles suspiciously.

“Morning, George! No bacon? No potatoes?” My father turned to me, accusingly.

“I’ll go get them for you.” I said, but my father grabbed my arm, insisting he didn’t want any.

Over the next 20 minutes, we ate in silence as the rest of the table discussed 401K’s, mortgages, office memos, and politics. Stuff I definitely did not care about. I could tell that my father desperately wanted to participate, but every time there was a lull in the conversation, he shoved eggs into his mouth instead.

Chewing and chewing and chewing until the moment passed. He was surprised when the waiter cleared his plate. He wasn’t ready for it and I couldn’t take watching his hands nervously dance from his lap to his water glass to his napkin to the salt shaker. I got up.

“I’m going to get more food.” My father stood too. We shuffled towards the buffet together and picked up two more clean, empty plates.

“Are you really hungry?” he whispered to me.

“Do you want to go back to the hotel?”

“I thought the shuttle bus doesn’t leave for almost another hour.”

I couldn’t believe my ears. My father was notoriously frugal about cabs. In fact, we had taken 2 buses, 3 subways, and walked a mile from our house to catch our flight here from JFK.

The fact that he couldn’t wait 42 minutes for arranged transportation indicated he was having some serious doubts about being part of The Achievers Club. But I knew how he felt.

The following Monday he was going to drop me off at college where I didn’t know a single soul, with nothing of real value to me other than my collection of Phish bootlegs. I pictured what I wish he would say to me before he left: “It’s going to be fine. It’s going to be okay.”

I filled a plate with bacon and headed back to the table, placing it right in the center. I cleared my throat and made an announcement. “Bacon for everyone to share.”

I felt my dad’s eyes on me as Navy Blazer reached across and grabbed a fistful. “What a thoughtful daughter you have, George. You really raised her right.” When I finally looked at my dad, he smiled and took a piece too.