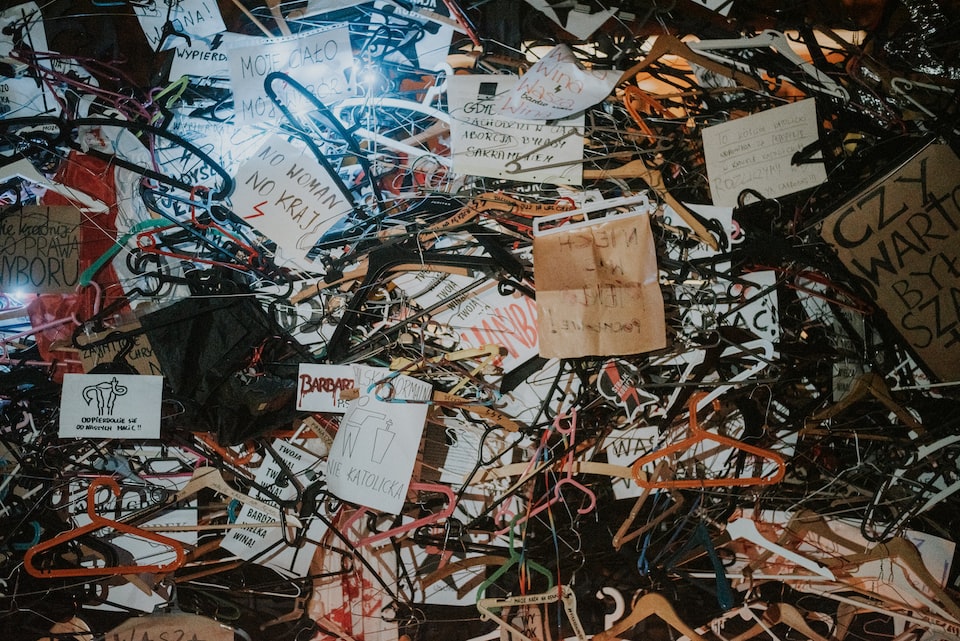 Disclaimer: I use the term 'women', and whilst these problems predominantly affect cisgender women (and sadly girls), but this will also heavily affect trans men and non-binary people. The removal of reproductive rights (and the main focus of this article) is not about reproduction or protecting the sanctity of life, it’s about controlling women. But it is important to acknowledge that banning abortion affects all people who can become pregnant.

When will women finally receive completely autonomy and agency over our bodies?

The US state of Texas dangerous and vindictive law, Senate Bill 8, which prevents abortion after a foetal “heartbeat” can be detected, even in cases of rape and incest, came into effect on Wednesday 1st September.

At the beginning of 2021, the Polish government introduced a law that banned abortions in all cases except for rape, incest, or when the pregnancy is life-threatening for the mother.

Polish philosopher and feminist Ewa Majewska’s “Feminist Antifascism” talks about the process of “enforced reproductive subordination” of women, a part of the “gendered bio-political rule” of the (extreme) right-wing nationalistic politics undergoing a worrying rise in recent years, particularly in the global north, and specifically in Poland.

The Texas abortion ban is part of series of restrictions enacted on reproductive healthcare globally but within the US itself — this year, 11 states have introduced 90 restrictive laws on access to abortion.

What does this bill mean?

Firstly, the concept of a foetal heartbeat is disingenuous — it’s a flutter in the area that will eventually become the heart, the group of cells “gain the capacity to fire electrical signals”. This occurs at 6 weeks pregnant (or more accurately six weeks after your last period), when it is still considered an embryo, and can only be detected because of the advancement in ultrasound technology.

Reaching this stage does not predicate the viability of a successful pregnancy and ultimately most people are not aware that they are pregnant at this stage: it’s a missed period.

Another element of this barbaric, restrictive, and extremist bill is that it promises a $10,000 reward or incentive for individuals to sue those suspected of violating the new laws.

Not only is this extremely worrying, putting the power into the hands of abusive ex-partners, religious zealots, and other vindictive people, but it targets health centres that provide these services, and those who “aid and abet” abortion, such as a young girl’s mother driving her to terminate her pregnancy for example.

This is what makes this bill even more repugnant than it already was. This ultimately raises fears that reproductive healthcare services will be forced to close due to them providing abortions as part of their services.

Banning abortions never truly ban abortions. It bans access to safe abortions and drives women to desperation and dangerous extremes. The World Health Organisation estimates that 45% of all abortions performed are unsafe abortions. Furthermore, whilst the abortion rate globally has reduced, abortions occur more frequently in areas where abortion is illegal or restricted, forcing women to find unsafe and dangerous alternatives.

Unfortunately, this does not affect all women equally: much of the burden is borne by poorer women and women of colour. Wealthy white women will always have access to the resources and discretion necessary to access medically safe abortions without fear of repercussions.

Reactions are as you can imagine: numerous people, the most vocal often men, suggesting that banning abortion is perfectly sane, and if women don’t want to get pregnant they should’ve kept their legs closed in the first place.

This is ridiculous and abhorrent on numerous levels: firstly, men are never held to the same standard, they are never told to stop having sex in order to prevent unwanted pregnancies.

Secondly, the main argument on this rests on the archaic notion that women mustn’t enjoy sex, must only have sex for the purposes of reproduction, and should be punished for any pleasure they do experience. Here there is no care for the imagined potential life of the foetus but instead uses an unwanted child as a vindictive tool for women who do not fit the expected model of a “good” woman under the patriarchy.

Finally, it fails to take into account that horrifically many pregnancies are the result of rape and/or incest and often involve a child themselves, whose welfare and right to life is disregarded over a clump of cells.

We can have multiple discussions over when life begins and if abortion is morally right, but that is the wrong argument: instead, we should be focusing on the inalienable right of bodily autonomy and the right to choose for all people, we should be focusing on centring the women as people with histories and tangible connections to the world over an embryo or a foetus.

Abortions can be a difficult decision, they can also be a simple decision for many women, and, regardless of your personal opinion, we should respect others decisions and ensure that everyone has access to the safest possible healthcare that they need.

Ultimately, the succession of anti-abortion laws aren’t about preventing abortion at all, nor are they about being pro-life: if they were, surely there would be much better support and infrastructure for struggling families living in poverty, better education, free healthcare, and surely there wouldn’t be so many children in foster care? Anti-abortion laws are about controlling women.

Forcing women to take on a reproductive role against their wishes, to present women as nothing more than vessels to bring life into the world with no choice in the matter is as obscene and offensive as it is degrading. And it all centres around control.

In Silvia Federici’s seminal work “Caliban and the Witch: Women, the Body and Primitive Accumulation”, she places the subjugation of women into reproductive roles to maintain the labour force and make them dependent on waged male labour is a cornerstone of capitalist development.

Central to this was in removing women’s control over reproduction: previously women had access to contraceptives and knowledge of abortion, often performed by midwives. In removing women from access to medical knowledge and control over their own bodies (most graphically through the witch-hunt), healthcare was placed into the domain of men, a decision that has had and continues to have profoundly negative impacts to this day.

All of this is to say that, there is a plethora of historical precedence for capitalist patriarchy seeking to control women through restricting reproductive healthcare.

I am lucky enough to have never had to make the decision to get an abortion, and I’m also lucky that I live in a country where these rights do not (currently) seem under threat and with a loving network that would support whatever decision I made.

I’ve had access to sex education, alongside numerous resources to educate myself. I have access to numerous free contraceptive methods and have the choice to decide which is best for me.

But many others are not in such a fortunate position, and these are the people we need to protect, whose rights we need to enforce.

These tools – education, contraception, and access to abortion services – are in fact crucial to reducing the number of unwanted pregnancies and abortions, safe or unsafe. If you consider yourself pro-life, you should always be pro-choice.

If not, you are pro-controlling and condemning women for choices they are more than entitled to make as human beings.