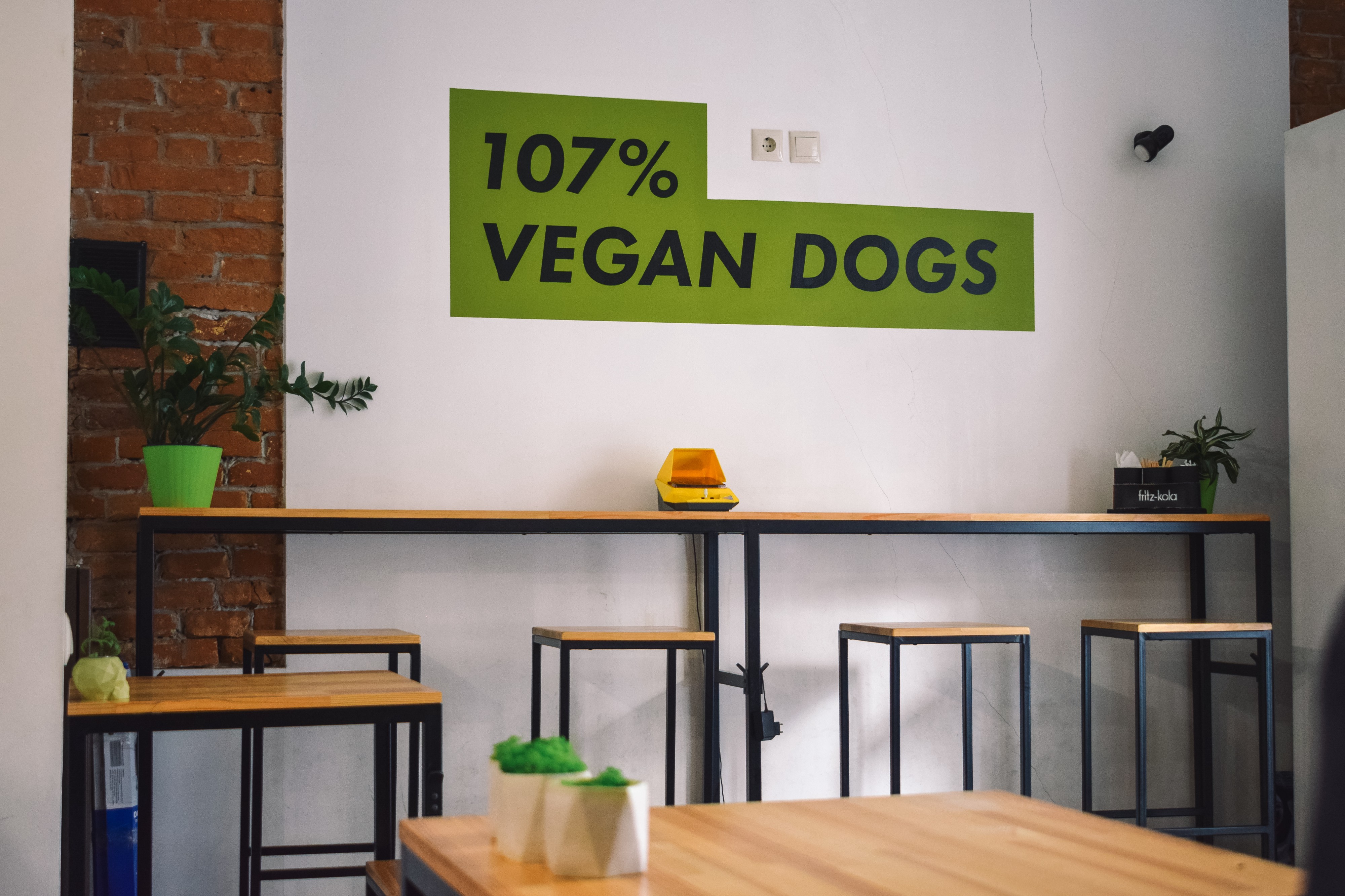 Photo by Darya Tryfanava on Unsplash

In 2016, the Vegan Society reported there were twice as many women vegans (63%) than men (37%) in the UK. One could suggest many reasons why that might be the case.

Women are generally considered to have more empathy and consideration about wider issues like animal welfare, the environment, and some suggest they are less stubborn than men when it comes to re-evaluating their beliefs and habits, particularly in pursuit of a healthier lifestyle.

But I would argue this statistic, among others where vegan men are shown to be a minority, reflect deeper concerns about abstaining from animal products, and their bearing on masculinity.

In other words, there is still a widespread view that “eating meat makes you more of a man”, which I want to get to the bottom of.

As the Urban Dictionary definition goes:

Despite admittedly finding humour in it, the belief that soy consumption can negatively impact the male physique and sex drive is less funny and more interesting.

Rather than seeming like just another instance of toxic masculinity, it represents a common misconception that vegan men have less testosterone than their meat-eating buddies.

It’s such a prevalent belief among men, that this myth can deter young men (often insecure or trying to achieve bodybuilding gains) from pursuing the advantages that come with adopting a plant-based diet.

Does consuming soy actually give you lower testosterone?

The worry is that consuming high amounts of phytoestrogen could cause oestrogen production in men. Oestrogen of course being one of the main female sex hormones, so it already is becoming easy to see where this misconception comes from.

It began with the Nagata study in 2000. It arouses suspicion that there might be a link between the consumption of soy products, and a drop in testosterone levels in men.

But only a year later in 2001, he extended the sample size of his study and retracted his previous findings to say there was in fact little to no evidence to suggest that consuming soy contributed to lower testosterone production in men.

Yet the question persisted whether there was a link between diet and testosterone production, reflected by countless studies on the matter. The most could find, published by the World Journal of Urology in May 2020, concluded:

That means regardless of being a meat-eater, vegetarian, vegan, or whatever; scientifically, there is no link between what a guy eats and their testosterone levels.

Couple that with the understanding that soy foods like Tofu have been a staple in Japanese cuisine for thousands of years, it becomes even more confusing why men are worried they might suddenly grow tits.

Some may concede that even if there is no link, it’s still extremely difficult and virtually impossible to get to the same level of gains as someone consuming meat and dairy.

Sure, it’s the classic “where do you get your protein from?” argument, but I can see how it is a genuine concern when someone is choosing to cut out meat and dairy; the latter of which constitutes eggs, milk, and protein powders which are found everywhere in the fitness world.

Perhaps surprising to some, many male vegan bodybuilders have praised the muscular benefits of the diet, heralding an increase in lean muscle mass rather than a decrease. Besides soy, eating loads of legumes, beans, vegetables, and consuming vegan protein shakes present a wide array of dense protein options, which come with the added benefit of less body fat.

This not only means you can get the same muscles from eating veg, but it also means a better chance of seeing those abs come out.

“I simply think that if animals are mistreated in their lifetime, then the quality of the food they produce will inevitably be poorer.” — Leon Gabbidon

If eating meat doesn’t affect testosterone, why does this perception still exist?

We could go back and forth debating studies of testosterone production, but it becomes clear that veganism being seen as non-masculine goes beyond these misconceptions.

In nearly every culture, there appears to be a prevalent belief that eating meat makes you more of a man. Whether it’s this Chinese McDonalds advert or a plethora of American steakhouse adverts promoted by voluptuous women, it’s an impression seemingly difficult for a lot of men to shake off.

“Meat has always been associated with danger because you used to have to hunt to get it, and status, because it was a prized food, and we lived in patriarchal societies — so men arranged that it would go to themselves,” says Steven Heine.

He believes the link between masculinity and eating meat is largely down to historical factors, going way back to when men were hunter-gatherers. Unsurprisingly, he also thinks it has a lot to do with years of advertising propagating this notion:

“In most cultures, manhood is earned through social displays, competition, and aggression, and is socially, rather than biologically determined”.

According to a ‘social dominance theory, men may find eating meat appealing when reminded it is made from animals, reinforcing their apparent sense of dominance and superiority. It appears a lack of respect for animals taps into a victory against nature, which supports their manhood.

But as we have all evolved from our primate selves, masculinity as a gender construct seems to be left behind. Like Gilmore says:

So the most compelling reason why there are more vegan women isn’t strictly down to a higher capacity for empathy, concerns about hormones and protein, or even 4chan forums.

It has much more to do with toxic masculinity, which has refused to evolve with the modern world.

No matter your view on feminism, one thing is for sure. It had done a great deal in liberating Western women from traditional archetypes of femininity. It has mostly abandoned notions that a woman must be a subservient, lady-like, sexualized being, and allowed young women the possibility to be whoever they are.

But the same has not been the case for men and masculinity. For the most part, masculinity has refused to evolve. It requires virtually all men to participate in appearing strong, impenetrable, and without vulnerability.

It is no surprise then, that masculinity is outdated, toxic, and fragile. Any man going against the grain is considered a threat, and therefore likely to be branded a cuck, or soy boy.

The discussion of whether soy products contribute to oestrogen growth in men is irrelevant, compared to the fact that men are threatened by ‘becoming feminine’. It also implies they have a problematic conception of femininity as weak, subservient and unconducive to growth — which is actually quite sexist.

If it really were the case that being vegan made you ‘more feminine’, so what?

This fragile idea of masculinity places more value on the appearance of being strong and ripped, rather than actually being these things. In my opinion, it takes a lot more strength, integrity, and conviction to switch to a vegan diet, where a majority of men would laugh at you for doing so.

Even if it were the case that soy consumption caused high levels of oestrogen production, I doubt many adherents of this ‘theory’ would care about its bearing to trans people, who should have a greater concern about this considering the notoriously expensive hormone therapy they must undergo.

It’s easy to see this discussion as obviously bullshit, thinking anyone can see past the attempts of insecure basement-dwellers projecting their half-baked assertions into the world.

But one can say that about many of the issues within toxic masculinity.

Be it men’s emotional repression, shamefulness around crying, and the widespread body dysmorphia in men often pushing them from a young age to be more strong and athletic. For those who don’t participate in masculinity, they all seem like problems with obvious answers, and we are wasting our time talking about it.

But it is important to discuss these issues if they remain so influential, as generations of young men are left clueless as to what real masculinity constitutes. It is a devastating thought that some could be deterred from pursuing a plant-based diet because they are concerned that it could contribute further to their shame and insecurities.

So, how can veganism make you more masculine?

Gender constructs are a tricky subject to discuss. They’re invisible, intangible, and enforced both by everybody and nobody at the same time.

It’s curated by the perceptions we gain from our peers, advertising, magazines, and our cherished idols. Something feminist theorists often refer to as the ‘Fashion-Beauty Complex’.

A reconstruction of masculinity can’t be done overnight, especially considering its slow evolution. But I believe (and hope) it can happen by treating these delicate subjects seriously, and opening discourse into subjects men wouldn’t usually talk about.

There are, in fact, many ways veganism can make you a stronger and more attractive person which is more in line with being a ‘strong man’, than this toxic masculine conception. Namely:

There are, of course, many reasons why I believe someone should try their best to limit the consumption of animal products. But I wanted to pen something for young men in particular.

Masculinity is something we can all work together to change, much like how femininity has evolved from its primordial state. Starting with a willingness to confront our problems with total honesty, will reap so many benefits not only for guys silently suffering in confusion, but the people and the world around them.