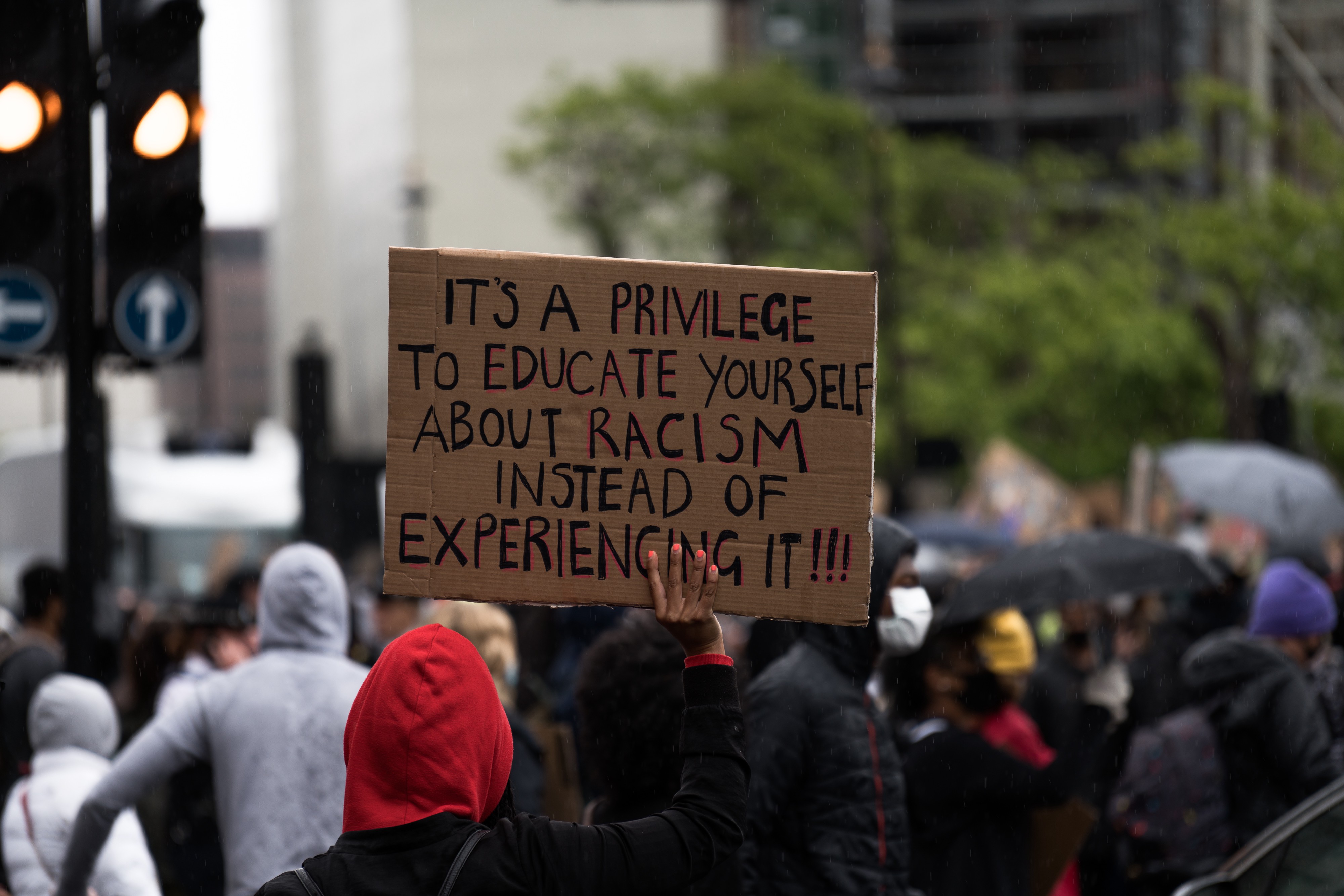 Photo by James Eades on Unsplash

My mother-in-law sent me a book recently, Begin Again, a biography of James Baldwin, written by Eddie S. Glaude Jr. The name flittered around in my memories for a moment but came up empty. I never learned about James Baldwin in my predominantly White Midwestern public school.

Usually a fast reader, I am only now an introduction and one chapter deep. The information, sentiment, and history on these pages have already split open a chasm of insight for me into the terrifying resurgence of overt racism on social media, the news, and in the streets. I am both ashamed and inspired.

On page 6, I came across a passage written by Baldwin in 1962, “It is, alas, the truth that to be an American writer today means mounting an unending attack on all that Americans believe themselves to hold sacred. It means fighting astute and agile guerilla warfare with that American complacency which so inadequately masks the American panic.”

Our country finds itself back to this place of panic, hence the title of the book, Begin Again. Glaude sums up Baldwin’s passage, “… Baldwin’s view of the writer was a decidedly moral one. The writer puts aside America’s myths and legends and forces a kind of confrontation with society as it is, becoming a disturber of the peace in doing so.”

This sentiment has spoken to me in various ways throughout my adult life. Shortly after Trump’s election, I read one of Howard Zinn’s speeches in which he stated, “Very often rebellion starts in the culture. It starts with the poets and the writers.”

I have taken this quote as my mantra, but always from the place of finger-pointing. It is easy to be accusatory in this society, to see how other people are wrong and immoral and shame them for it. Baldwin, through Glaude, has reminded me that I should be under scrutiny as well.

I am a middle-class White woman originally from the Midwest now living in a predominantly White but far more liberal region in Northern California. I have believed many lies in my life. Like the lie that electing a black president was a sure sign that America had made significant advances in the fight against racism.

Reading Begin Again has urged me to ask what role do I, and can I, play in this battle. As a writer, how can I contribute to this conversation and help expose the truth beneath society’s lies when I am still learning myself?

I understand that it should not be the job of people of colour to lead these conversations with White people. It should not be their responsibility to explain to us the nuances and blatant exploits of our society’s structure, the systemic racism that permeates it all. People of colour have been doing the heavy lifting for far too long, and it is now time for more White people to step up.

I have donated money to organizations whose work is to fight racial inequality. I now seek authors and podcasts whose voices have been largely absent from my own life experience. I clumsily engage those Facebook “friends” who can’t seem to grasp the purpose and intentions of Black Lives Matter. In my interactions, conversations, writing, and podcast, I am vocal about my support for racial equality.

But when it gets overwhelming, when the violence and the hate reach too deeply into my psyche, I turn off the screen and walk away.

I recently texted a friend of mine, raging against some ignorant, racist comments on Facebook. After my rant, I realized I should have spared her those frustrations as they were just more in a litany of her life experiences.

She is a woman of colour, and after I sent her an apology, she texted, “I like friends that are expressing with passion what a pain this is. For me, my whole life I always had to be strong, always gaslighted about racism and now I’m allowing myself to be vulnerable and hurt and still have to keep in mind that most people around me willfully chose to act like racism didn’t exist until it was a f*#%ing hashtag or until racist politicians started infiltrating their seemingly safe lives_. It feels so strange to see anti-racist stuff posted and still getting pissed because where were you 30 years ago when adult men threw rocks at me and called me n***er._”

It was the “you” that got me. I know my friend did not mean “me” in particular, but I have a growing recognition of my place in this story.

Until recently, I claimed that I grew up in a racist part of the country. (Now, of course, I realize racism is not something that has settled in pockets of our society but has tendrils that stretch and weave throughout our foundation.)

It was not uncommon to hear inappropriate jokes or the N-word is thrown around when I was out. I was proud that those sentiments were never allowed in my own home. I assumed, at the time, that was enough. I didn’t come from a racist family. I wasn’t racist. That was enough, right?

I was wrong. I am new to the conversation of White people’s substantial roles in reshaping our society’s thinking and actions regarding race. I have been tucked away with my securities of, “I’m not racist, so everything is fine over here.”

I apologize for that.

So what is my moral obligation as a writer in this conversation? I’ve written and performed poems disparaging racial inequality, but it’s easy to be outraged and get on stage at poetry night to proclaim it. I know that work does not dig deep enough.

Do I write about this personal journey? Expose the process of uncovering my own intrinsic biases and culturally ingrained lessons about race? Do I stumble through awkward and potentially politically incorrect conversations? Do I rely on my friends of colour to correct me when I am wrong?

In my highest expectations, writing publicly about my own process will reach those White people like me, with good intentions but a lack of knowledge or idea of where to begin. I fear that I will misrepresent myself and my intentions in my struggles to understand. The race has always been an uncomfortable conversation for me, and my privilege has helped me avoid it.

I’m sorry that I am late to the conversation, that I am a part of that “you” on the other end of a pointed finger. Honestly, I am still not clear on my role in this struggle or what I have to offer. For now, I will start where semi-educated White people like to start, with a book as my guide and pen and paper my confessional. I will find my way, however awkwardly, from here.

As Glaude, in his interpretation of Baldwin, wrote, “The lie is the story that warps reality in this country, which means that resisting it involves telling in each moment a truer story, one that casts the lie into relief, showing it for what it is.”