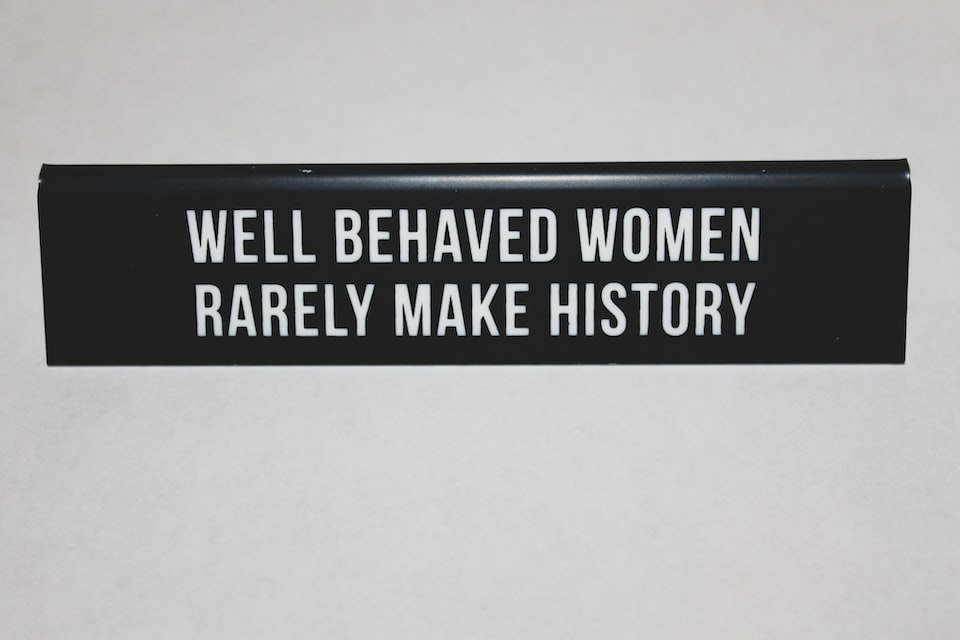 “You came across as very aggressive,” the text read, “and I just didn’t know what to say in response”. I thought that was quite amusing, considering he always had something to say. As somebody who avoids confrontation at all costs, being called aggressive was ridiculously funny. I had to wrack my brain to think about how I’d come across so badly; what had I said, what were we talking about, what had I done wrong? Then I realised that I hadn’t actually done anything “wrong” at all.

This was a genuine text I received from someone I’d been talking to, who I met up with for what can’t particularly be considered a date, and who I hadn’t heard from in a few weeks. I could tell from the off that he was quite intelligent and that I’d be able to have the kind of conversations and debates that I love to have.

One particular conversation I remember was centred around a comment I made about the fact that men view women as objects. This isn’t a particularly radical notion; our patriarchal capitalist society routinely and insidiously objectifies all women, and this, in turn, stops many men from being able to see women as whole human beings, rather than something that exists for them to consume.

But it was something that he was obviously offended by. Men often have trouble with generalised statements like this, taking it as a direct personal attack, rather than an accurate observation of society at large. Individuals don’t live in a vacuum and it would be naive to pretend that we aren’t all influenced by the patriarchy. In the same breath, I was told that he viewed women as completely equal to men, but that third-wave feminism was more about redressing the balance of power in favour of women, and essentially how there are men’s jobs and women’s jobs which accounts for what we consider the gender pay gap (and in turn, that this isn’t necessarily a bad thing).

Despite our very obviously different opinions on these issues, we had a normal debate and left things on good terms. In short, there was no argument and no personal attacks. So being told a couple of weeks later that I had been “aggressive” was a shock to me. Of course, I’m no stranger to the comments and ridicule that sometimes comes with being a feminist, and I’m familiar with the (not so) subtle sexism that permeates the language we use towards women who dare to hold and express strong opinions.

On top of being called “aggressive”, I was also told that I came across as quite anti-men, and that;

“for what it’s worth, you need to take some time to yourself so that you can approach a new partner positively and not immediately start looking for the negatives in them.”

Throughout this conversation, I was never told exactly what I’d been doing “wrong.” He was convinced that I was letting previous bad experiences affect new relationships and that I couldn’t hold everybody to the same standard. Here’s the thing though — I can. Too many times, I had let men who I was dating walk all over me, and get away with things for fear of driving them away if I confronted them.

I decided that I needed to set some clear boundaries in my new relationships. In this case, I was left on reading by him, mid-conversation, for a whole 24 hours (in which he was active on social media). He messaged me saying how busy he’d been with friends and work. I’m a reasonable person and I understand that people are busy, but equally, it only takes a few minutes to reply or to communicate that you’re busy and will reply as soon as you’re able. I expressed my disappointment at this, outlined my boundaries, and things got awkward, to say the least.

After the conversation, where I was completely and utterly criticised for mainly expressing my views, I realised something. Men really do not like it when you assert yourself, be it your opinions or your boundaries. I would never have dreamt of calling him “aggressive” for expressing his opinions. I expressed what I felt, I questioned him over his beliefs, yet I’ve now been painted as the aggressive one.

This didn’t sit right with me, so since then, I’ve been evaluating my previous romantic experiences. I’m surrounded by a lot of great girls who all consider themselves feminists. My social media feed is filled with posts about feminism. However, I was extremely naive to believe that we live in a society that has now fully embraced the feminist movement.

Overall, people I’ve been in any sort of relationship with have been quite left-leaning, self-described feminists. Yet not one of these men has really treated me with the equality and respect that I deserve. I’ve had a string of frankly poor experiences. Relationships where I’d been lied to, used for sex, ignored, gaslighted, taken advantage of, and completely disrespected. I’ve allowed boys to completely walk all over me and it’s safe to say that I’m ashamed and disappointed that I accepted that kind of behaviour.

My whole self-worth was wrapped up in being liked, acceptable, desirable and palatable to men. In February, after my last ‘relationship’ ended, I decided that I wasn’t going to be that girl anymore. It’s been a hard learning process and it still takes a conscious effort to put me first before this conditioned need to be wanted by men, but it’s working.

I’m tired of women being told they’re too much, that they’re bossy, that they’re a bitch, and that they’re aggressive. I’m aware that nothing I’ve said is radical or revolutionary, which irritates me all the more. All of this has been said before time and time and time again. So why is nobody listening, why do men refuse to alter their behaviours and attitudes? Why are men continually threatened by women who have a voice?

These aren’t behaviours and attitudes we can attribute to people having lived in ‘a different time’, these are pervasive attitudes held by young men, my own age, who have grown up with and been exposed to feminism on an unprecedented scale. The level of gender stereotyping and performative femininity that is still required in heteronormative relationships is astounding. The man who called me “aggressive” in reality expected me to shrink myself down, to be passive, to be silent, to be seen as acceptable and palatable to him. By expressing my own thoughts and opinions (which contradicted his) and by setting boundaries as to what behaviours I’m willing to accept from a potential romantic partner, I became “aggressive” and “negative”.

I won’t lie that I was devastated and upset in being painted as the angry man-hating feminist. But let’s face it, I’d rather be true to my beliefs and call the men in my life out on their prejudices, rather than continue to be passive to gain their approval and validation. So until men are willing to fully embrace feminism and alter their behaviour towards women, I’ll just have to continue to be seen as the “aggressive” man-hating feminist.