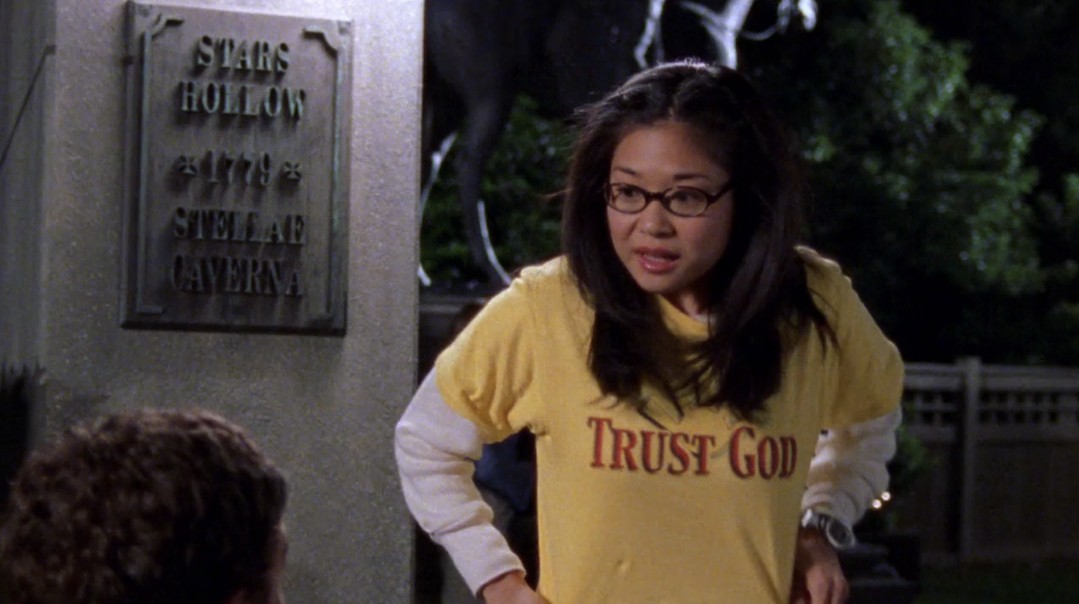 If you’re reading this you are likely familiar with Seventh-Day Adventists either because you are one or because you watched Gilmore Girls growing up.

For those unfamiliar and still reading, Seventh-Day Adventism is an extremely niche sect of Christianity that in 1844 split off from the Millerite movement after an event called “The Great Disappointment.”

Seventh-Day Adventists, or Adventists for short, are extremely strict, fixated on doomsday “end times” prophecies, and worship on the Sabbath (from sundown to sundown Friday through Saturday).

Lane Kim was the strictly raised Seventh-Day Adventist best friend of Rory Gilmore on the show Gilmore Girls. I grew up very similarly to Lane’s character and saw a lot of myself in her. Being raised Adventist, I was extremely isolated due to the strict religious practices. Seeing Lane basically live my life on TV made me feel less alone and it was fun to live vicariously through her as she quietly rebelled.

I am no longer an Adventist, but I still love Lane and will always get a kick out of seeing Adventists onscreen. 10 times Lane and I lived the same Seventh-Day Adventist life.

1. The episode where Dean and Rory kiss for the first time and Mrs Kim overhears.

This is so accurate for Adventists I always snort-laugh at this scene. SDA’s are really into abstinence, and some young girls go so far as to say they are “married” to God and pledge to save even their first kisses for their husbands.

Posters for the Purity Ball on display at the Seventh-Day Adventist Madison church in Nashville, on Jan. 16, 2010. The dance features a vow to abstain from sex until marriage and offers tips on ‘appropriate’ touching.

2. The episode where Lane has to go on a hayride with her church group!

I cannot count how many hayrides I went on as a kid. I couldn’t find a picture of myself on a hayride, but here are some other Adventists enjoying one on their website.

3. The tofu and other fake meat, oh the fake meat.

If you’re an extra good Adventist you are a vegetarian/vegan, but regardless if you eat meat or not (NEVER PORK) everyone eats the fake meat when we’re all together.

Adventists even have special grocery stores we call “the ABC Store,” that sell a bunch of fake animal products. My favourite fake meat still today is the fake sausage links we called “presages.”

4. The episode where Lane is going to an Adventist college and talks about how strict it is.

You might think Lane is exaggerating here, but she is not.

I was not allowed to wear nail polish (or jewellery, or makeup, or any other form of “adornment”) until I was an adult and could make my own decisions. Even then an excessive amount of any kind of accessory is frowned upon. If you’re a really good Adventist you don’t even wear a wedding ring.

Ellen White, one of SDA’s prophets, forbid the use of condiments. Apparently, pepper gets you drunk.

5. The episode when Lane dyes her hair purple and then has a panic attack when her mom comes home.

I remember holding my breath when first watching this episode. I would have had the same reaction she did. We were absolutely not allowed to have “unnatural” hair colours.

6. The episode when Lane has to make extremely elaborate secret plans to see the boy she is dating and comes up with a decoy, codeword, and hand signal.

I never made such extreme plans to see boys, but I definitely had to balance many delicate situations like that. I was the master of the “vague truth that is technically a lie, but close enough to get away with it” technique Lane employs here. I used it to go see Mean Girls in theatres with my first boyfriend when I was 14.

Seventh-Day Adventists are actually recognized medically for the specific diet they have. It is so strict and so free of “unhealthy” foods, that Adventists have a higher life expectancy than the general American population. Foods fried with grease are not on the list of godly foods to consume.

8. The episode where Lane’s mom finds all her hidden stuff beneath the floorboards and under her mattress.

I hid Justin Timberlake’s Justified CD in a case for Relient K.

I was always really jealous of Lane’s creativity and the guts she had to be herself and hide all her stuff, I was too afraid of getting caught.

9. The episode where Rory makes a joke about teenage pregnancy and Mrs Kim replies, “Boys don’t like funny girls.”

Besides the absurdity of the statement itself, it’s hilariously accurate with regards to how fixated Adventists are with getting kids married. I was told over and over that “boys don’t like that” because the most important thing was that I was seen as marry-able.

It’s so beaten into our heads to get married young that Adventist colleges even have dorms specifically for all the married couples (although it’s not explicitly advertised as such).

10. The episode with the dance competition where Lane is forced to pass out “you’re going to hell” pamphlets to all the participants.

One tiny detail they got wrong here is that Adventists don’t believe in the concept of hell, but they do definitely forbid dancing.

This was me at 15 going to our winter banquet because prom, and dancing, was forbidden (I’m surprised they allowed my bare shoulders).

Growing up Seventh-Day Adventist was hard, but having Lane made it a little bit easier.

Thank you, Lane Kim, for being a light and showing me the way.